We’ve known about Intel’s Cooper Lake platform for a number of quarters. What was initially planned, as far as we understand, as a custom silicon variant of Cascade Lake for its high-profile customers, it was subsequently productized and aimed to be inserted into a delay in Intel’s roadmap caused by the development of 10nm for Xeon. Set to be a full range update to the product stack, in the last quarter, Intel declared that its Cooper Lake platform would end up solely in the hands of its priority customers, only as a quad-socket or higher platform. Today, Intel launches Cooper Lake, and confirms that Ice Lake is set to come out later this year, aimed at the 1P/2P markets. 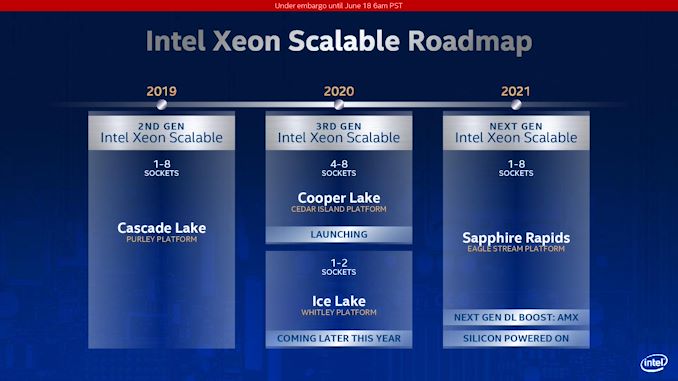 For Cooper Lake, Intel has made three key additions to the platform. First is the addition of AVX512-based BF16 instructions, allowing users to take advantage of the BF16 number format. A number of key AI workloads, typically done in FP32 or FP16, can now be performed in BF16 to get almost the same throughput as FP16 for almost the same range of FP32. Facebook made a big deal about BF16 in its presentation last year at Hot Chips, where it forms a critical part of its Zion platform. At the time the presentation was made, there was no CPU on the market that supported BF16, which led to this amusing exchange at the conference:

BF16 (bfloat16) is a way of encoding a number in binary that attempts to take advantage of the range of a 32-bit number, but in a 16-bit format such that double the compute can be packed into the same number of bits. The simple table looks a bit like this:

By using BF16 numbers rather than FP32 numbers, it would also mean that memory bandwidth requirements as well as system-to-system network requirements could be halved. On the scale of a Facebook, or an Amazon, or a Tencent, this would appeal to them. At the time of the presentation at Hot Chips last year, Facebook confirmed that it already had silicon working on its datasets.

The second upgrade that Intel has made to Cooper Lake over Cascade Lake is in socket-to-socket interconnect. Traditionally Intel’s Xeon processors have relied on a form of QPI/UPI (Ultra Path Interconnect) in order to connect multiple CPUs together to act as one system. In Cascade Lake Xeon Scalable, the top end processors each had three UPI links running at 10.4 GT/s. For Cooper Lake, we have six UPI links also running at 10.4 GT/s, however these links still only have three controllers behind them such that each CPU can only connect to three other CPUs, but the bandwidth can be doubled.

This means that in Cooper Lake, each CPU-to-CPU connection involves two UPI links, each running at 10.4 GT/s, for a total of 20.8 GT/s. Because the number of links is doubled, rather than an evolution of the standard, there are no power efficiency improvements beyond anything Intel has done to the manufacturing process. Note that double the bandwidth between sockets is still a good thing, even if latency and power per bit is still the same. 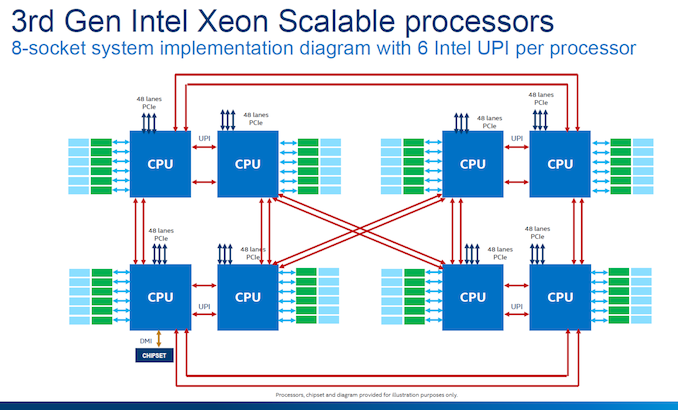 Intel still uses the double pinwheel topology for its eight socket designs, ensuring at max two hops to any required processor in the set. Eight socket is the limit with a glueless network – we have already seen companies like Microsoft build servers with 32 sockets using additional glue logic.

The base models of Cooper Lake will also be updated to support 1.125 TiB of memory, up from 1 TB. This allows for a 12 DIMM scenario where six modules are 64 GB and six modules are 128 GB. One of the complaints about Cascade Xeons was that in 1 TB mode, it would not allow for an even capacity per memory channel when it was filled with memory, so Intel have rectified this situation. In this scenario, it means that the six 128 GB modules could also be Optane. Why Intel didn’t go for the full 12 * 128 GB scenario, we’ll never know.

The higher memory capacity processors will support 4.5 TB of memory, and be listed as ‘HL’ processors. 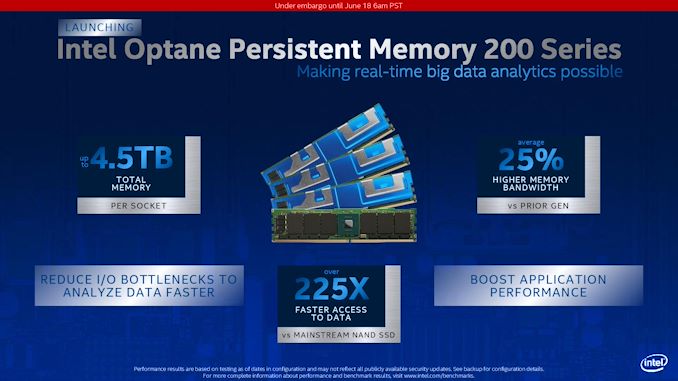 Cooper Lake will also support Intel’s second generation 200-series Optane DC Persistent Memory, codenamed Barlow Pass. 200-series Optane DCPMM will still available in 128 GB, 256 GB, and 512 GB modules, same as the first generation, and will also run at the same DDR4-2666 memory speed. Intel claims that this new generation of Optane offers 25% higher memory bandwidth than the previous generation, which we assume comes down to a new generation of Optane controller on the memory and software optimization at the system level.

Intel states that the 25% performance increase is when they compare 1st gen Optane DCPMM to 2nd gen Optane DCPMM at 15 W, both operating at DDR4-2666. Note that the first-gen could operate in different power modes, from 12 W up to 18 W. We asked Intel if the second generation was the same, and they stated that 15 W is the maximum power mode offered in the new generation.