The AMD B550 Motherboard Overview: ASUS, GIGABYTE, MSI, ASRock, and Others

The ASRock B550 Taichi is the top-end model from the company, with the key highlight being the use of Intel’s 2.5 gigabit Ethernet controller as well as the Intel AX201 module for Wi-Fi 6 capabilities. As with other ASRock Taichi models, the focus is always on all the cogs working together, and for this motherboard the company has splashed a good amount of brushed metal around the heatsinks. The chipset heatsink is an extended affair across most of the bottom half of the motherboard, also covering the two M.2 slots. 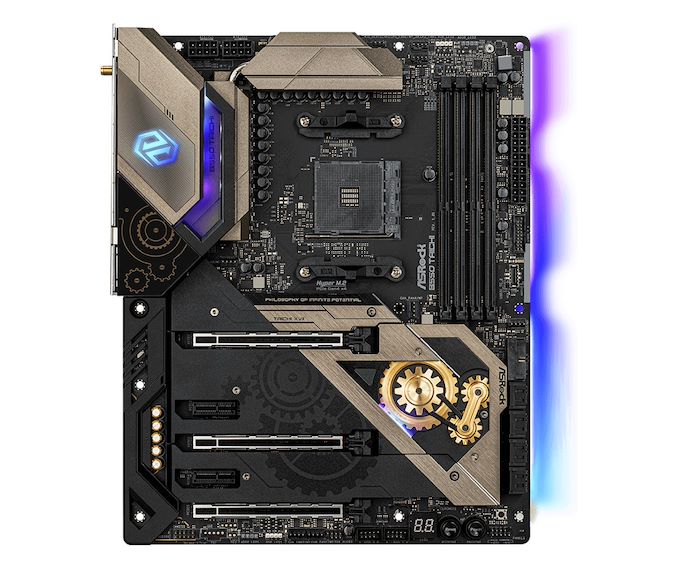 This motherboard is also unique among other B550 boards by offering dual 8-pin CPU power connectors, along with sixteen power phases on board. Despite this being a B550 ‘mid-range’ motherboard, ASRock wants users to push the system, as right in the middle is enscribed ‘Philosophy of Infinite Potential’.

The socket area has four easy-to access 4-pin fan headers, and the power delivery heatsink extends through a heatpipe into a more solid mass on the rear panel. The system has single sided DRAM slots, suggesting users need to push hard on the modules to make sure they are in properly. On the right hand side of the motherboard are two USB 3.0 front panel headers, a USB Type-C header, another 4-pin power connector, and eight SATA ports.

Another unique thing about this board is that this is the only B550 board we have seen with eight SATA ports. In this case, ASRock uses the four SATA ports on the chipset and adds another four from an ASMedia ASM1061 controller. 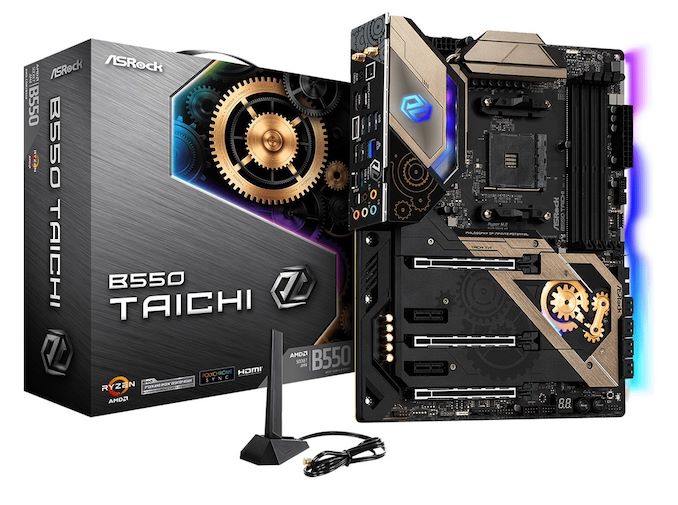 The top two full-length PCIe 4.0 slots from the CPU can run at x16 or x8/x8, while the bottom full-length slot is a PCIe 3.0 x4 from the chipset. Each of these three slots use extra protection for heavy graphics cards.

On the bottom of the motherboard are additional fan headers, RGB headers, two USB 2.0 headers, and power/reset buttons with a two-digit debug LED.

Audio on the right hand side of the motherboard comes from a Realtek ALC1220 codec, which also has an NE5532 amp in the setup.