On The Wings of an Eagle: GIGABYTE's X570 I Aorus Pro WIFI Motherboard Tested

The mini-ITX form factor is an interesting one as it allows users to create a small form factor system with the ability to integrate some of the top-performing hardware from the desktop segment. Usually small form factor comes with a premium, but the GIGABYTE X570 I Aorus Pro WIFI looks to change that with a modest price of just $220, which is an aggressive price against the competition in the X570 market. With features including an Intel AX200 Wi-Fi 6 wireless interface, support for DDR4-4400 memory, and two HDMI 2.0 video outputs, this X570 motherboard looks to have the mid-range market in its sights.

Hunting for a Bargain

Users that build small PCs typically have several considerations in mind: where the system is going to end up physically, how much noise/heat will it produce, and how much it will cost. We've seen variations on the purpose of small PCs over the years, such as mini gaming setups, HTPCs, or users who want to give something small to family/friends so it doesn't cause them too much hassle. The key of this market, especially those building something with a bit of power, is the mini-ITX market. There are a range of mini-ITX motherboards available, depending if the user wants to do something dual-core or quad-core basic for intermittent use, or the more high-end where it's going to be paired with a big graphics card. For the latter, it typically means using the latest chipset, to get the best connectivity options and to make sure the system is some level of bullet proof. High-end mini-ITX motherboards using the latest chipsets also come in many varieties, from the super cheap to the 'how many bells and whistles' can you fit onto it. The GIGABYTE X570 I Aorus Pro that we're testing today actually sits in the middle of those two segments - it uses the more premium X570 chipset, which affords support for PCIe 4.0 and higher memory support, but it also has an aggressive pricing at $220 MSRP, which is actually just within a popular price segment for larger ATX motherboards. We've seen other mini motherboards with AMD chipsets get a lot of attention, and GIGABYTE is hoping for something similar here.

The GIGABYTE X570 I Aorus Pro WIFI takes aim at the popular price bracket of the X570 market, which is populated with many different ATX sized offerings, and GIGABYTE keeps things simple with an effective selection of features: fitting two M.2 slots on this size of motherboard is difficult, but GIGABYTE does it, with both slots supporting PCIe 4.0 x4 drives. Networking includes gigabit ethernet and Wi-Fi 6, and we get a refined power delivery layout very similar to GIGABYTE's flagship ATX offerings. 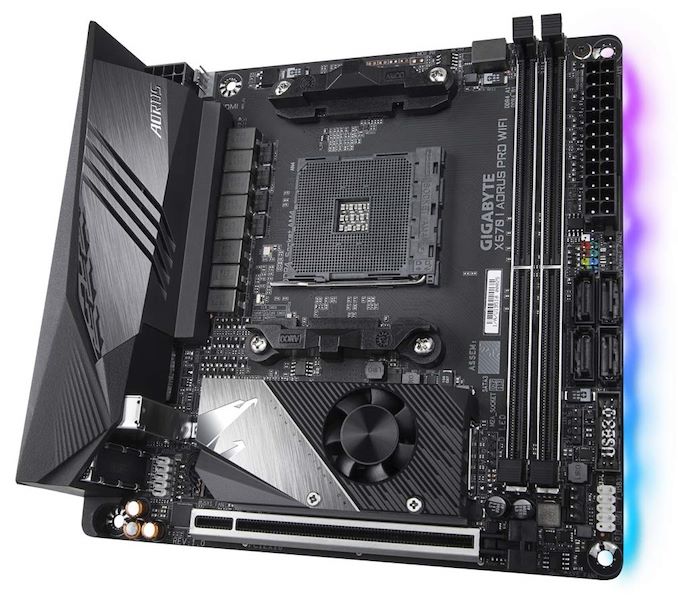 Looking at the design of the X570 I Aorus Pro WIFI, GIGABYTE has opted for a very subtle black and grey colour scheme with just one element of integrated RGB LED lighting. This can be found at the right-hand side of the board and can be controlled by GIGABYTEs RGB Fusion 2.0 software. For users looking to add more, there is a pair of headers including a single ARGB LED and single RGB LED header. The VRM heatsink doubles up as a rear panel cover which has plenty of bulk to help dissipate heat from the 6+2 power delivery. For reference, this board is using six Infineon TDA21472 power stages for the CPU section of the power delivery and is same power stages that the flagship GIGABYTE X570 Aorus Xtreme is using, albeit in a smaller package with fewer phases. 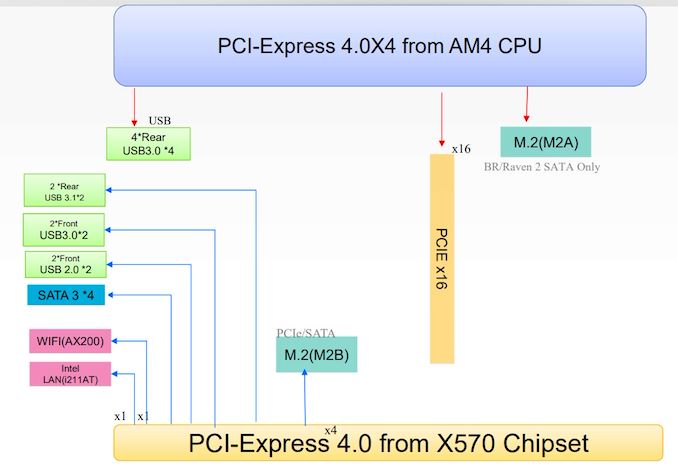 GIGABYTE X570 I Aorus Pro WIFI Block Diagram
(even though it says x4 at the top, they mean x24)

In the right are two memory slots, which support up to DDR4-4400 with a maximum capacity of up to 64 GB. This is more than acceptable for a board of this size and it's widely known that AMD recommends DDR4-3600 or DDR4-3733 for the best overall performance when overclocking. On the rear panel is a trifecta of video outputs including two HDMI 2.0 outputs, and one DisplayPort 1.2 output. This allows users to drive up to three monitors from Ryzen processor with integrated graphics, making this model more than suitable for users opting for a small form factor HTPC or entertainment system. The onboard audio codec of choice is the Realtek ALC1220-VB but offers just three 3.5 mm audio connectors on the rear panel.

Looking at the performance, and the GIGABYTE X570 I Aorus Pro WIFI is very consistent and competitive with other models on test. A particular highlight was how power efficient it was in our long idle, idle, and full-load power testing. Areas such as POST time also highlights how well this board performs, with our computational and gaming performance testing displaying that mini-ITX models can perform just as good as the bigger sized models, sometimes better.

Overclocking with the GIGABYTE X570 I Aorus Pro WIFI with our Ryzen 7 3700X processor yielded mostly positive results. Our testbed Ryzen 7 3700X has yet to achieve higher than 4.3 GHz on any board tested thus far, and we easily achieved 4.3 GHz with a CPU VCore of 1.350; the GIGABYTE X570 I Aorus Pro WIFI achieved this with a slightly lower load VCore of 1.348 V. The VDroop compensation is brilliant for a board of this pedigree and from 3.6 GHz to 4.2 GHz, the CPU VCore load voltage remained consistently between 1.206 and 1.212 V, even with 1.250 V set in the BIOS. The software included with the board includes an automatic overclocking function, but it didn't prove useful. Performance in our POV-Ray benchmark increased as we tested each frequency, and we found no abnormalities.

With only a handful of mini-ITX and small form factor options on the X570 chipset, the GIGABYTE X570 I Aorus Pro WIFI is the cheapest of the bunch with a retail price of just $220. This is in comparison to the ASUS ROG Strix X570-I Gaming at $299, or the ASRock X570 Phantom Gaming-ITX/TB3 model ($240) which includes an Intel Thunderbolt 3 controller, which is probably the main competition here. The GIGABYTE has two PCIe 4.0 x4 M.2 slots, compared to one slot with the ASRock. The GIGABYTE is then the cheaper option in the mini-ITX space, but it holds itself very well with cues from the more expensive boards from GIGABYTE.