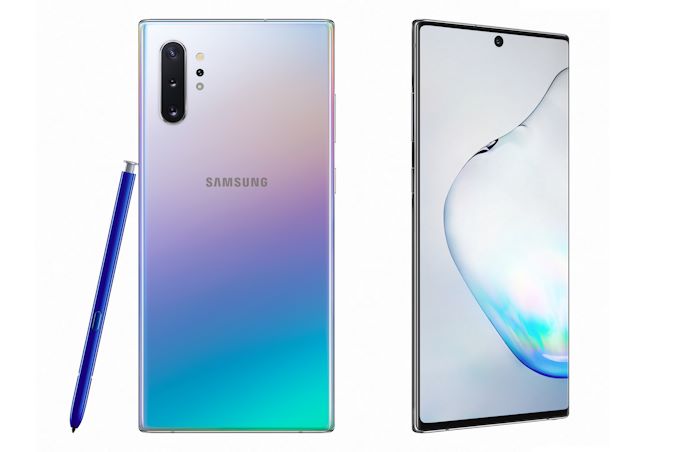 It’s that time of the year again. We’ve made it past the first half of 2019 and all vendors have released their initial flagship devices for the year. Samsung was amongst the first to usher in the new generation with the Galaxy S10, S10+ and S10e, and as has been traditional for many years, it’s now time for a refresh of Samsung’s second flagship lineup - the Galaxy Note. Today Samsung is unveiling two new devices: the new Galaxy Note10 and Note10+, marking a significant departure from its usual Note device formula.

The last time that Samsung has diverged from its single Note device model strategy was back in 2014 when the company had unveiled the new Galaxy Note Edge alongside the Note 4. Back then the company had used the diverging model to promote the curved screen design, which was still a new feature at the time. This year, Samsung again is releasing two models of the Note, however this time around, the company is differentiating the Note10 and Note10+ in terms of device size, much like on the mainline Galaxy S series of the last few years. Unlike the S-series however, the two new Note10’s also differ from each other in terms of some features, some which are unexpected and likely to raise quite a few eyebrows.

Naturally, the hallmark feature of the Note series is still very much present in both phones: The integrated pen stylus continues to evolve and this year brings new features such as air gestures.

On the hardware side of things, this year we’re actually seeing the SoCs inside the new Note actually diverge from what was used in the Galaxy S10 series – with the Exynos in particular being quite different. Samsung continues to dual-source SoCs both from Qualcomm and its own SLSI division. For the North American market, China and Japan, the Note10 and Note10+ come with the Snapdragon 855 processor which we've come to know from the S10.

The rest of the world however gets a totally new SoC. Whilst the S10’s Exynos 9820 came in a 8nm process node which seemed to slightly lag behind the 7nm efficiency of the Snapdragon 855, the new Note10’s come with a brand new Exynos 9825 refresh that Is manufactured on Samsung’s new 7nm EUV process node. In effect, this will be the very first EUV consumer silicon in the world. Whilst manufactured on the new node, the new chip doesn’t radically change its IP and thus looks very much similar to the 9820. Samsung did make some minor changes such as clock the middle CPU cores higher to 2.4GHz, and also promises that the GPU is now clocked higher, however we should be expecting evolutionary rather than revolutionary performance changes. It’s likely that Samsung invested the process node advantages into more power efficiency – an area the 9820 lagged behind the Snapdragon 855 in.

The Note10 is abandoning the microSD card – however Samsung looks to have not put storage at a disadvantage as the new phones come with an extremely large base storage of 256GB. The Note10+ still retains the microSD, and also comes with a 512GB storage option. 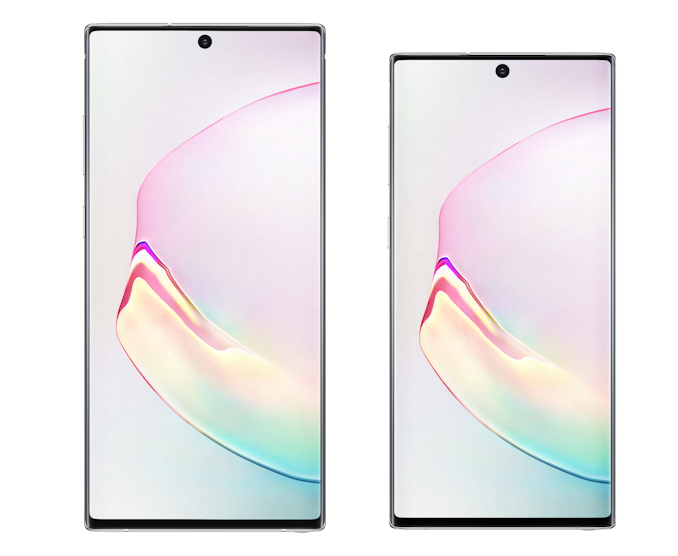 The Note10+ supersizes its screen and is now of a 6.8” diagonal, bigger than that of the Note9. In fact the device has grown over the Note9, being 1mm wider and nearly as much taller, although the footprint size increase isn’t as notable as the screen size increase, thanks to the significantly smaller bezels on all sides. The screen continues to be a 3040 x 1440 resolution panel and comes with all the features that were introduced with the Galaxy S10.

The smaller Note10 display however for me is a bit let-down just for the fact that Samsung has opted to go with a 1080p panel, 2280 x 1080 to be precise. Yes, the new Note10 now represents a smaller device model and it’s straight up smaller than the Note9 and all past Note devices. However, the screen isn’t all that much smaller – it’s in effect the same dimensions as that of an S10+ which is still quite large. The fact that Samsung opted to go with a 1080p panel here just boggles my mind as a straight up downgrade for anybody coming from past Note devices. I was extremely excited to hear Samsung was going to introduce a smaller Note device (The past form-factor was a tad too big for my teste), however this screen resolution discrepancy had me lose all interest.

The only other explanation for the lower resolution screen is that Samsung has had to reduce the battery capacity of the regular Note10 to 3500mAh, whilst the Note10+ sees an upgrade to up to 4300mAh. It’s possible that the company weighed in this 22% difference and decided the two phones to have more similar battery life, sacrificing the screen on the Note10 for it.

The new design of the new Note10’s is a bit more exciting as this year it takes a lot more departures from the S-series than usual. On the front of the phone the biggest change is that Samsung has now moved over the hole-punch from the right side of the screen to the centre. It looks a bit more symmetrical now, however there’s still compromises with the design choice as the cut-out is still a larger diameter than the notification area, resulting in dead space. It’s to be noted that Samsung did not adopt the dual-camera setup of the S10+ in the Note series, which frankly in my opinion was redundant anyhow. There continues to be no notification LED anymore as Samsung seems to be pushing for always-on-display notifications (which drain more battery).

One big question about the new centre-camera setup is how Samsung will be handling the top speaker earpiece. The Galaxy S10’s earpiece was excellent serving as a high quality stereo speaker, so we’ll have to see how the new Note10 pans out in this regard. 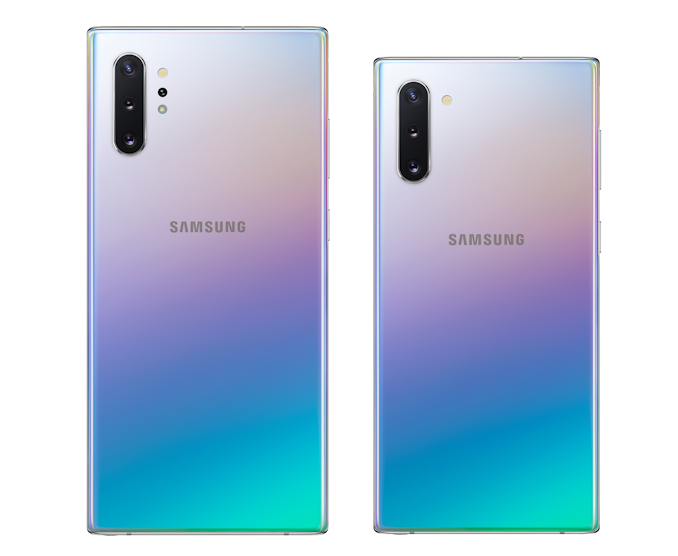 Flipping the phone on its back, we probably see Samsung’s biggest design language departure ever. This is the first time Samsung has gone for a non-central camera positioning in its flagship devices. The result is… a bit generic and very familiar. I can’t help but draw parallels to Huawei’s P30 series here when it comes to the design as both line-ups now have exactly the same setup, including cut-outs for the flash and the new ToF sensor.

Yes, one of the new features on the Note10+, and exclusive to the + variant, is the addition of a new time-of-flight sensor. Samsung first introduced this in the 5G variants of the Galaxy S10, and it served for features such as live video bokeh effects.

At time of writing we’re not sure what the second cut-out on the Note10+ is, but when looking at the Note10, there’s an obvious lack of a feature: no heat-rate monitor. We’re not sure if Samsung has integrated this transparently under the screen, or if it’s simply another feature that hit the chopping block. 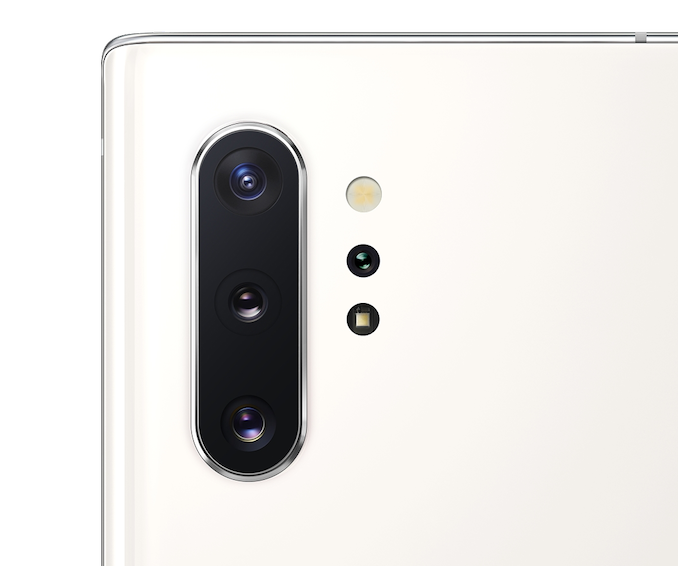 In regards to the cameras, there’s not too much news here. They’re the same setup as on the Galaxy S10 and S10+, which includes a 12MP main sensor, 12MP telephoto, and a 16MP wide-angle lens. One difference here is that the telephoto lens now has an f/2.1 aperture which is an upgrade to the f/2.4 lens of the S10.

It’s to be noted that since the launch of the Galaxy S10 earlier this year that Samsung did improve its camera software a lot. The biggest new feature is a new full-blown computational photography Night Mode that competes as among the best out there. Still, we wish Samsung did something more exciting on the camera sensor side of things such as demonstrated by Huawei, unfortunately it seems we won’t see much changes in this regard till the S11 next year.

Finally, the biggest head-scratch for the Note10’s is a sad one. Samsung has now fallen prey to the industry move to drop the 3.5mm headphone jack, and the new devices represent Samsung’s first flagship devices to ship without one. Samsung had been the last bastion of hope in this area and with the company now deciding against the versatile and robust connector. The biggest question for me now is if features such as Samsung’s Adapt Sound also got killed with it, or if the company has somehow managed to at least save one of its past selling points. It’ll be interesting to see if Samsung’s 3.5mm dongle managed good audio quality, like that of Apple’s, or if it’ll be a disaster like essentially all other Android vendors’ units.

Overall, the new Note10 series represent a departure for Samsung, and frankly I’m not sure it’s a good one. The new design of the phone is great, however I have to very much question some of the feature disparities between the new models and overall the changes and loss of some features. The smaller Note10’s 1080p screen in particular looks to be a deal-breaker for me even though it’s still a very expensive device. I was immensely happy to see Samsung deliver feature parity between the small S10 and the S10+ this year, unfortunately I just can’t say the same about the Note10 and Note10+.