Eagerly awaited across the tech industry, this week the Alliance for Open Media (AOMedia) has published the first complete version of the bitstream and decoding process specification for their royalty-free AV1 video codec. The release of the AV1 1.0 spec will enable backers of AOMedia to add support for the technology to their products or services, including taking the all-important step of finalizing the designs for the low-power hardware decoders critical for driving the codec's adoption. At least initially, AV1 will be used primarily for streaming video and user-generated content as an alternative to HEVC and its ongoing royalty disputes, but eventually adoption of AV1 may expand to other applications.

The AV1 open-source video codec was developed with 4K+ ultra-high-def resolutions, HDR, and wide color gamut in mind. Among the key features the new codec, AOMedia mentions a 30% more efficient compression algorithm compared to existing methods, predictable requirements for computational capabilities of hardware, and maximum flexibility and scalability. The backers of the AV1 want the codec to be ubiquitous across devices and platforms, therefore expect it to be supported not only by major chipmakers, software designers, and service providers, but also by leading makers of consumer electronics. 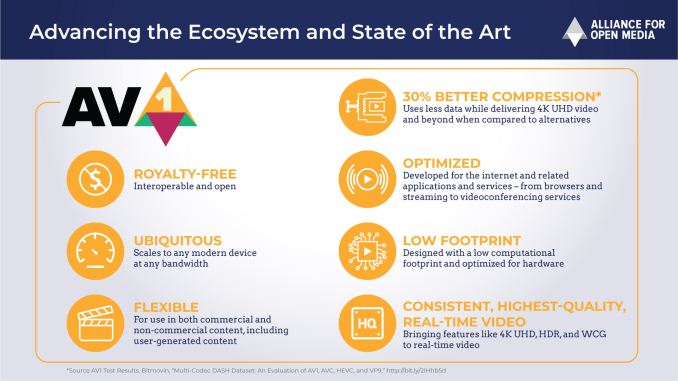 AOMedia does not disclose key technological peculiarities of the AV1 video codec in a short whitepaper form, meanwhile parsing through a 600-page bitstream and decoding spec for developers does not necessarily help to explain all the peculiarities of the tech in general. Therefore, I am going to limit technical details about the AV1 to a necessary minimum here.

On a high level, the AV1 is conceptually similar to existing codecs, such as H.264 or H.265. AV1 uses the same basic elements as various codecs have used for well over a decade: block-based coding, variable block sizes (up to 128x128 pixels), block motion compensation, intra-frame compression, forward-integer transform and so on. Meanwhile, since we are talking about compression algorithms more efficient than existing ones, it is natural that the AV1 has a number of advantages over contemporary codecs. 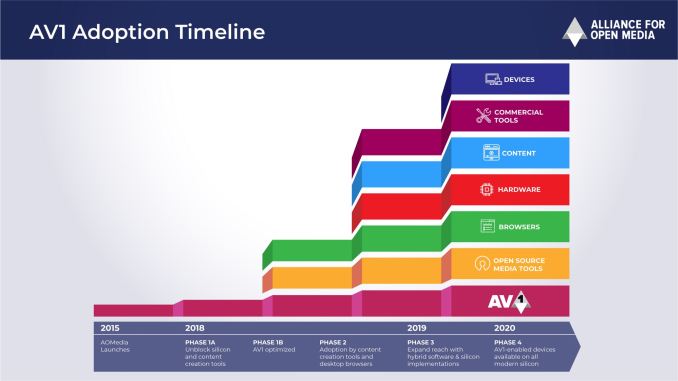 The publication of the AV1 spec 1.0 is merely the first step towards adoption of the technology by the market. AOMedia expects content creation tools and desktop browsers to begin to roll out support for AV1 later this year. To ensure this, AOMedia released an unoptimized/experimental AV1 software decoder and encoder for use in software applications. Then, sometimes in 2019, the consortium anticipates select chips and programs to support the tech. More widespread support of the AV1 along with adoption by software is projected for 2020. 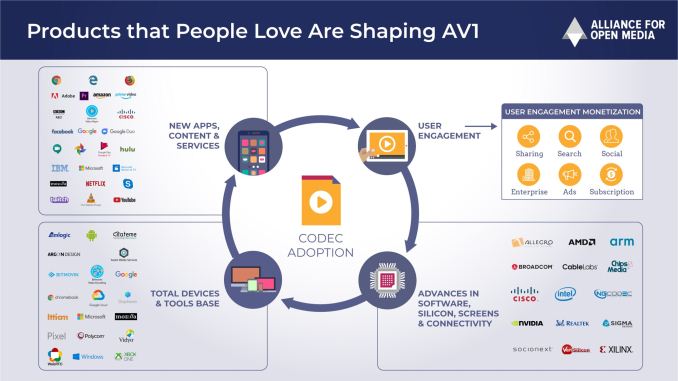 Speaking of adoption, the list of AOMedia members includes a variety of influential companies, including Apple, Amazon, AMD, Arm, Broadcom, Facebook, Google, Hulu, Intel, IBM, Microsoft, Netflix, NVIDIA, Realtek, Sigma and many others. These companies either control huge ecosystems themselves, or develop chips that are used by hundreds of millions of customers worldwide. Their support will ensure widespread adoption of the AV1 in the next decade. In the meantime, AOMedia has already started R&D for the AV2, which is to succeed the AV1 codec. 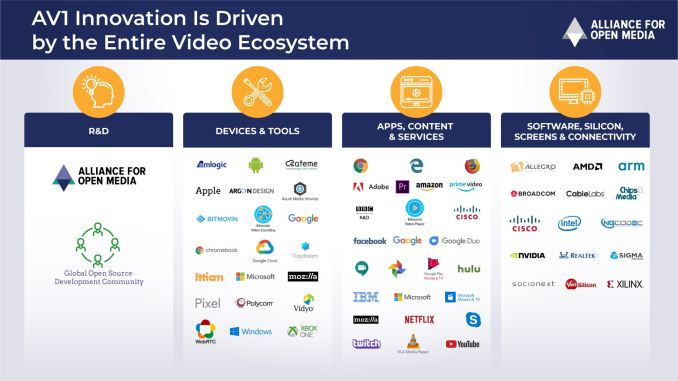