If you were paying close attention to this morning’s announcement of AMD’s new Ryzen Pro SKUs, then you likely noticed something interesting: the non-X PRO chips all have the same performance specifications as their standard consumer counterparts. Specifically, both of the non-X PRO SKUs with existing Ryzen 5 & 7 counterparts have the same core counts, clockspeeds, and TDPs. And for the final 2 Ryzen PRO 3 SKUS? Well, AMD has inadvertently shown their hand here when it comes to forthcoming Ryzen 3. 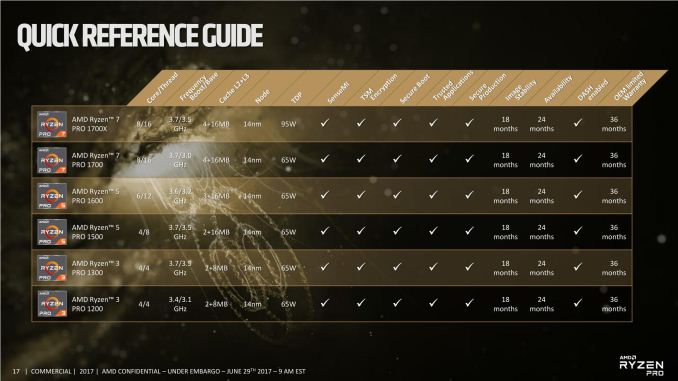 With the release of the Ryzen PRO 3 specifications, AMD has now confirmed what we’ve been suspecting for the Ryzen 3 specifications for a while now. Ryzen 3 is a quad-core CPU without SMT, so we’re looking at just 4 threads instead of 8, albeit 4 threads without any of the resource contention SMT can sometimes cause. On which matter, it’s worth pointing out that AMD has already previously commented that Ryzen 3 will use the same die as Ryzen 5 and Ryzen 7, so we’re looking at 4 cores distributed over 2 CCXs, like the Ryzen 5 1400 & 1500X.

Similarly, AMD’s reveal indicates that Ryzen 3 will have the same cache structure as the lowest-end Ryzen 5, the 1400. That means just half of the chip’s total 16MB of L3 cache is enabled. However each core still retains its full 512KB of L2 cache. Finally, this inadvertent reveal also confirms that TDPs for the lowest-end members of the Ryzen family will stick with the same 65W TDP as all but the highest-performance Ryzen chips.

Of course, it should be noted here that AMD’s accidental reveal doesn’t mean that the 1300 & 1200 will be the only Ryzen 3 chips we’ll see. Just like the Ryzen 5 and 7 only had a couple of PRO counterparts, it’s likely that the story will be the same for the Ryzen 3 series. In particular, Ian suspects a Ryzen 3 1300X will show up, but we shall see in due time…