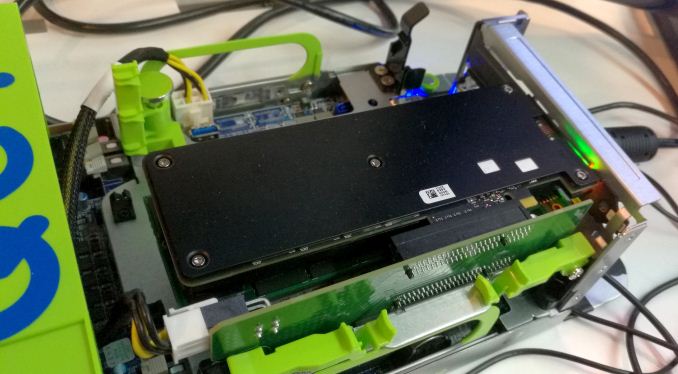 As part of this year’s Intel’s Developer Forum, we had half expected some more insights into the new series of 3D XPoint products that would be hitting the market, either in terms of narrower time frames or more insights into the technology. Last year was the outing of some information, including the ‘Optane’ brand name for the storage version. Unfortunately, new information was thin on the ground and Intel seemed reluctant to speak any further about the technology that what had already been said.

What we do know is that 3D XPoint based products will come in storage flavors first, with DRAM extension parts to follow in the future. This ultimately comes from the fact that storage is easier to implement and enable than DRAM, and the characteristics for storage are not as tight as those for DRAM in terms of break-neck speed, latency or read/write cycles.

For IDF, Optane was ultimately relegated to a side presentation at the same time as other important talks were going on, and we were treated to discussions about ‘software defined cache hierarchy’ whereby a system with an Optane drive can define the memory space as ‘DRAM + Optane’. This means a system with 256GB of DRAM and a 768GB Optane drive can essentially act like a system with ‘1TB’ of DRAM space to fill with a database. The abstraction layer in the software/hypervisor is aimed at brokering the actual interface between DRAM and Optane, but it should be transparent to software. This would enable some database applications to move from ‘partial DRAM and SSD scratch space’ into a full ‘DRAM’ environment, making it easier for programming. Of course, the performance compared to an all-DRAM database is lower, but the point of this is to move databases out of the SSD/HDD environment by making the DRAM space larger. 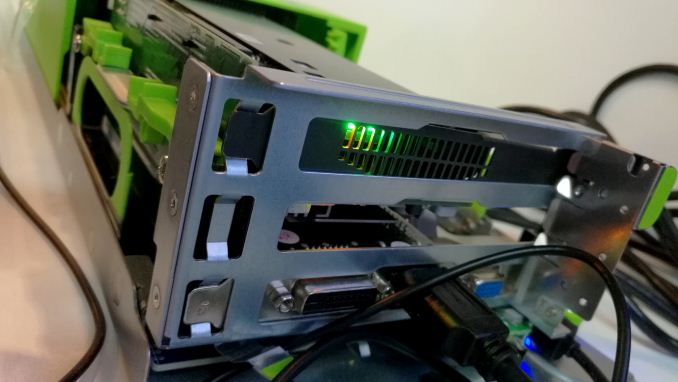 Aside from the talk, there were actually some Optane drives on the show floor, or at least what we were told were Optane. These were PCIe x4 cards with a backplate and a large heatsink, and despite my many requests neither demonstrator would actually take the card out to show what the heatsink looked like. Quite apart from which, neither drive was actually being used - one demonstration was showing a pre-recorded video of a rendering result using Optane, and the other was running a slideshow with results of Optane on RocksDB. 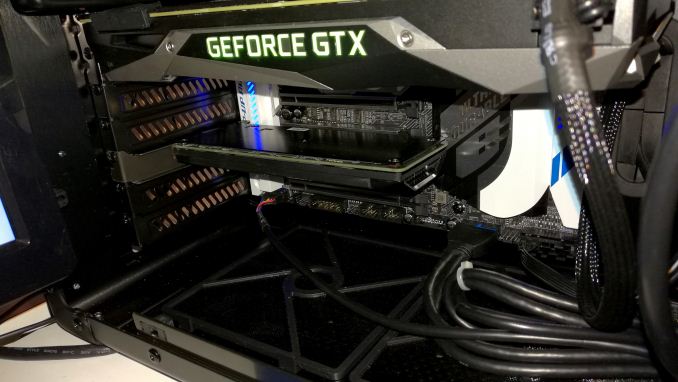 I was told in both cases that these were 140 GB drives, and even though nothing was running I was able to feel the heatsinks – they were fairly warm to the touch, at least 40C if I were to narrow down a number.  One of the demonstrators was able to confirm that Intel has now moved from an FPGA-based controller down to their own ASIC, however it was still in the development phase.

One demo system was showing results from a previous presentation given earlier in the lifespan of Optane: rendering billions of water particles in a scene where most of the scene data was being shuffled from storage to memory and vice versa. In this case, compared to Intel’s enterprise PCIe SSDs, the rendering reduced down from 22hr to ~9hr.

It's worth noting that we can see some BGA pads on the image above. The pads seem to be in an H shape, and there are several present, indicating that these should be the 3D XPoint ICs. Some of the pads are empty, suggesting that this prototype should be a model that offers a larger size. Given the fact that one of the benefits of 3D XPoint is density, we're hoping to see a multi-terabyte version at some point in the distant future. 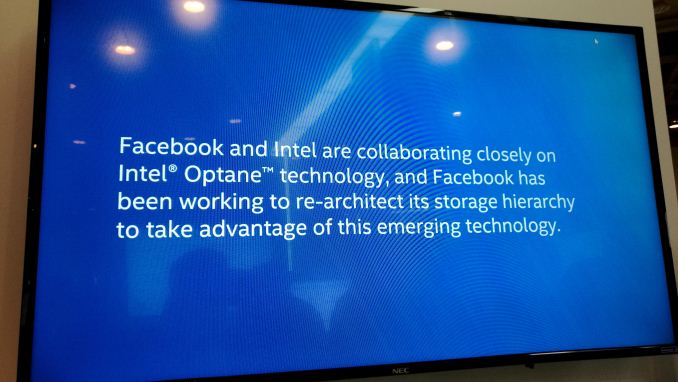 The other demo system was a Quanta / Quanta Cloud Technology system node, featuring two Xeon E5 v4 processors and a pair of PCIe slots on a riser card – the Optane drive was put into one of these slots. Again, it was pretty impossible to see more of the drive aside from its backplate, but the onscreen presentation of RocksDB was fairly interesting, especially as it mentioned optimizing the software for both the hardware and Facebook. 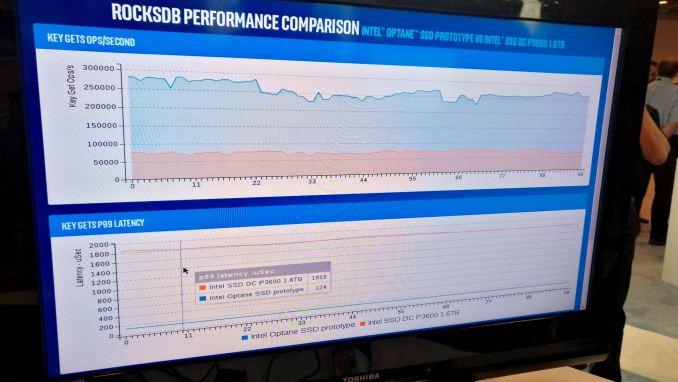 RocksDB is a high-performance key/store database designed for fast embedded storage, used by Facebook, LinkedIn and Yahoo, but the fact that Facebook was directly involved in some testing indicates that at some level the interest in 3D XPoint will brush the big seven cloud computing providers before it hits retail. In the slides on screen, the data showed a 10x reduction in latency as well as a 3x improvement in database GETs. There was a graph plotted showing results over time (not live data), with the latency metrics being pretty impressive. It’s worth noting that there were no results shown for storing key/value data pairs.

Despite these demonstrations on the show floor, we’re still crying out for more information about 3D XPoint, how it exactly work (we have a good idea but would like confirmation), Optane (price, time to market) as well as the generation of DRAM products for enterprise that will follow. With Intel being comparatively low key about this during IDF is a little concerning, and I’m expecting to see/hear more about it during Supercomputing16 in mid-November. For anyone waiting on an Optane drive for consumer, it feels like it won’t be out as soon as you think, especially if the big seven cloud providers are wanting to buy every wafer from the production line for the first few quarters.

More images in the gallery below.