The Motorola Moto G4 and G4 Plus Review

Because the internal hardware of our Moto G4 and G4 Plus units is only differentiated by the amount of RAM included, I have only run our standard benchmarks on the G4 Plus. Given that they share the Snapdragon 617 SoC, the CPU and GPU performance of the phones should be identical. I would have liked to have the Moto G4 Play in the comparisons, but it shares an SoC with the 2015 model of the Moto G and so that can be used as a point of comparison instead.

The Moto G4 pulls ahead of the 2015 model in PCMark, with the most significant gain being in the Photo Editing test. This test makes use of the GPU for processing, and the greater GPU performance that Adreno 405 provides compared to Adreno 306 is to thank for the nearly doubled photo score. As for the other tests, there are improvements, but apart from the web test the differences between the new Moto G and the old one are fairly small. 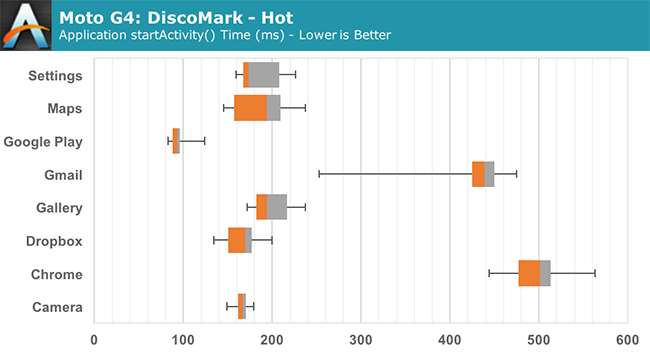 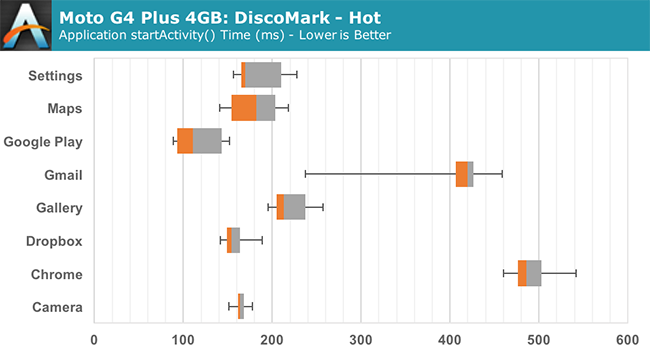 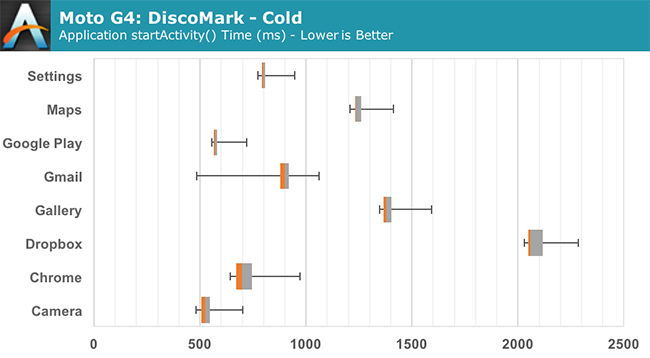 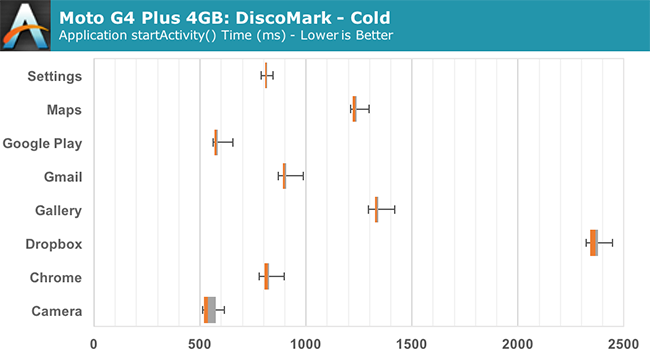 DiscoMark is one of the best benchmarks we have to describe the speed of a device. Delays in switching between apps can be painful from a UX perspective, and DiscoMark allows us to evaluate how quickly a device can resume an application that is resident in memory, as well as how quickly it can start one up from scratch.

One would think that the 64GB model of the Moto G4 Plus having 4GB of RAM would lead to improvements in DiscoMark, but in both cold and hot app launches the Moto G4 and G4 Plus perform similarly. To be honest, in this case the issue comes down to the size of the test set, as it is obvious when using many apps that the Moto G4 with 2GB of RAM has to reload them more frequently than the G4 Plus with 4GB of RAM. The only thing to note is that the G4 Plus seems to be more consistent with how long it takes to cold launch an app, which may be due to the additional memory being used for data caching.

The cold start times demonstrate the performance gap between mid-range and high-end devices. The average median time to launch an app on the Moto G4 and G4 Plus is nearly one second, which feels like an eternity when you just want to open something like a weather app to quickly check if it's going to rain. When you go from a $200 phone to a $400 one, this time is nearly halved. It may be that inexpensive phones can do a good job of scrolling a list and swiping between tabs smoothly, but high-end devices still have a clear advantage in circumstances such as these where the speed of launching an app is primarily a function of your SoC and DVFS settings.

The Xiaomi Redmi Note 3 is an exception to the rule. Priced around $150 depending on your storage configuration, the use of Snapdragon 650 with its Cortex A72 cores gives it a huge lead over mid-range phones that only have Cortex A53 cores. Being able to launch apps in half the time is a big advantage, and I think it's safe to say that the $50 extra for the Moto G4 Plus would have been better spent on improving the SoC instead of adding an IR rangefinder to the camera and a poorly implemented fingerprint scanner.

I reviewed the 2015 models of the Moto E and Moto G. I recommended both of them as the best Android devices in their class, because they made smart decisions regarding the balance of specifications, and they made the most of what you could do in a smartphone at their price points. At this point I've come to expect that even inexpensive Android devices can handle the basics of the Android interface without dropping too many frames. Motorola was a pioneer in making inexpensive phones that ran a lightly modified version of Android and did so with great UI performance. Obviously you didn't get the speedy app launch times of flagship smartphones, but once you were in your apps they all ran fairly smoothly.

The reason I bring this up, is because I can't say any of these things about the Moto G4 and G4 Plus. To address my first point, it's clear from the Moto G's specs that under Lenovo there's now a much greater focus on appealing to the Chinese market, and in many ways that really doesn't lead to a better smartphone. I already commented on how moving to 5.5" compromises usability compared to the previous models of the Moto G, but the internal specs of the phone tell a story of their own. The Moto G4 replaces the Snapdragon 410 SoC from the 2015 Moto G with Snapdragon 617.

Choosing an eight core Cortex A53 SoC to appeal to the Chinese market instead of a six core Snapdragon 650 was not a good decision for the user experience. There is basically no tangible CPU performance benefit that Qualcomm's eight core Cortex A53 SoCs provide over their quad cores, apart from the obvious speed improvements that come with higher clocks. Snapdragon 650 may not have been in the cards for the $200 Moto G4, but in the $250 model of the Moto G4 Plus the use of an SoC with a much faster CPU would have been a wiser investment than the fingerprint scanner and the laser autofocus for the camera. Playing the specs on paper game was never what the Moto G was about, it was about providing a well-balanced smartphone at a great price, and I don't see that philosophy in the new Lenovo-owned Motorola. 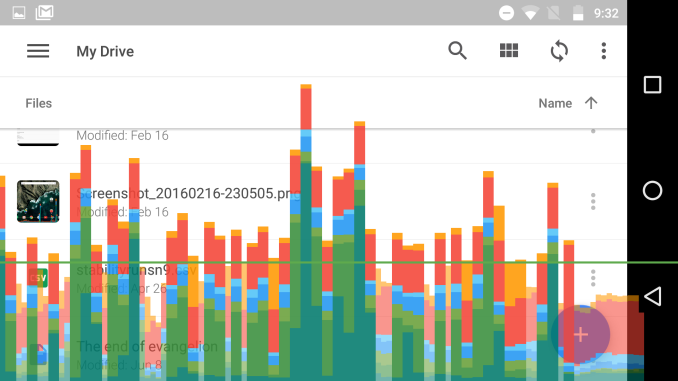 Any bar above the green line is a frame that took too long to render, causing sub-60fps rendering

Sticking with Cortex A53 throws away the chance to increase the phone's speed by cutting down load times, but Motorola has shown in the past that they can keep animations smooth even with relatively little processing power. For whatever reason, the Moto G4 often can't accomplish this either. There's clearly more stuttering throughout the UI than on the 2015 Moto G, with many ListViews and even RecyclerViews stuttering constantly when scrolling, while the 2015 Moto G remains smooth in the same situations. The level of input lag is also really bothersome, and scrolling seems to not respond correctly at times, with forceful swipes only shifting a list by a few rows. While the Moto G4 is pushing a higher resolution, it also has significantly more GPU processing power and I doubt that the performance issues are the result of inadequate hardware. More likely is that we're dealing with less than optimal firmware on the Moto G4, and later in the review you'll see other info to support this idea.

In the end, I don't feel that the Moto G's speed or fluidity is at the level it should be for a mid-range phone launching in the second half of 2016. When Xiaomi is bringing Snapdragon 650 to $150 smartphones, the performance of quad and octa-core Cortex A53 SoCs really only remains acceptable in low-end smartphones priced at $100 or less. On top of the relatively slow performance for an H2 2016 mid-range smartphone is the stuttering and input lag in the UI that makes the Moto G4's fluidity and responsiveness worse than its predecessor. The performance of the first Moto G to launch under Lenovo's ownership is unimpressive to say the least, and I think Lenovo and Motorola need to take a look at what made the previous Moto G phones great in order to understand why they've gone so far off course.