With its numerous extra keys and integrated palm rest, the SteelSeries Apex is a very large keyboard, measuring 56cm (22") wide and 22cm (8.7") tall. It is definitely not a product made for those with limited desk space and will place the mouse a little further to the right than usual. It has an all-plastic chassis in matte black, with a glossy black frame surrounding the keys. An overly large Space Bar key stands out, presumably for extra gaming comfort.

The keycaps are flat, with the bottom row beveled downwards slightly, most likely to avoid accidental key presses when a hand rests on the palm rest. SteelSeries also places a couple of slight bumps on the W key, to help gamers finding it quickly; at least that is what the company claims. Common sense dictates that if a gamer is looking for the W key in the middle of a game it can only mean trouble, and looking at the keyboard might be more efficient, but it might help in a few cases. 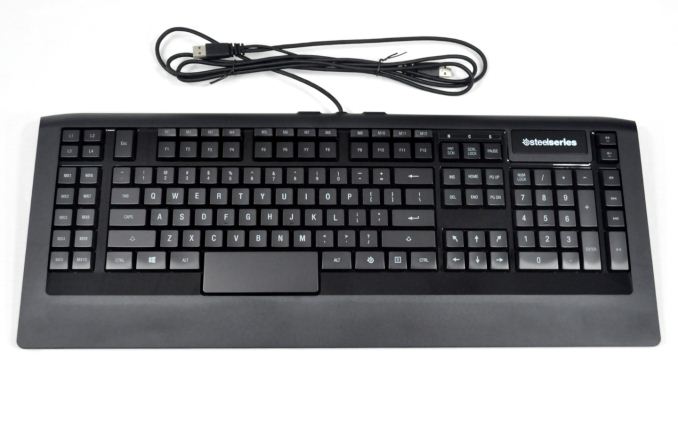 The number of extra keys on this keyboard is simply astounding. It has 22 macro keys, ten to the left side and twelve above the F-keys. At the upper left corner, there are four layer keys, allowing you to switch the layer of your current profile. Layers are sub-profiles, meaning that you can have four entirely different layouts programmed into a single profile and swap between them on-the-fly.

There are also two extra arrow keys, diagonally up-left and up-right. These actually are pre-programmed macro keys that will actuate both corresponding arrow keys simultaneously. Finally, there is a row of media keys to the right side of the keyboard, for basic volume and media play control. Unfortunately, the Play/Pause button is likely going to be mistakenly pressed many times instead of the enter button. The same goes for one of the L buttons instead of ESC. It is rather difficult to let go of old habits, though if you use the SteelSeries Apex exclusively you should eventually adapt.

Along the top edge of the keyboard, one USB 2.0 port is on either side of the thin braided USB cable. The sides are also illuminated, shedding some color on the desk. Finally, the bottom of the Apex is entirely flat and plain, without even plastic stands to adjust the tilt. The keyboard can be raised slightly by swapping the two top rubber feet with the taller ones supplied with the keyboard. We found nothing noteworthy inside the Apex except from the LED board under the membrane. 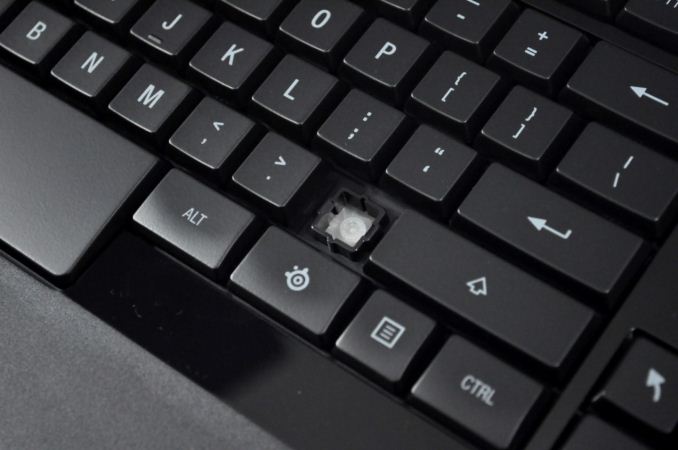 Perhaps the most important aspect of this keyboard is the software. Through the SteelSeries Engine, the user can access all of the advanced features of the Apex. The software allows for the creation of profiles and the programming of their layers, as well as the programming of macros and special actions.

When recording keypress macros, the user has the option to record the delays as well, and the delays are editable afterwards. Text macros, as the name suggests, insert a specified text nearly instantly into the application. They can be programmed to quickly deliver common in-game messages, such as "Hello!" or "Enemies at my position!". The macro recorder only records key presses, not mouse movements or other events. Keys can also be programmed to launch external applications, or be disabled entirely. 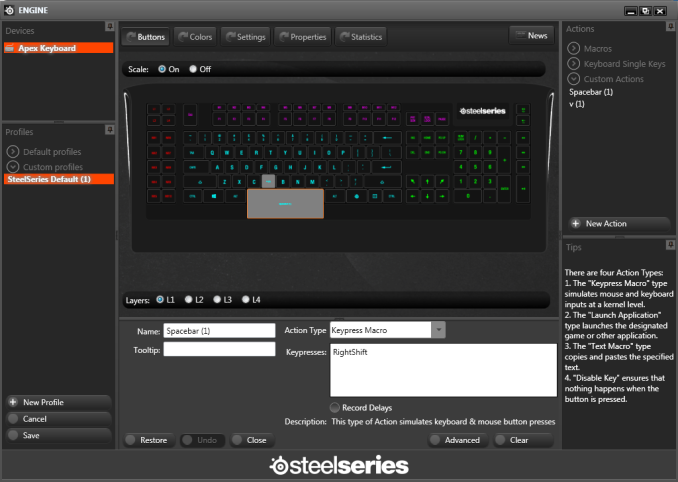 As far as lighting goes, the colors are fully customizable through the second tab (from any possible choice on the RGB scale) but there are limitations. The lighting of the keys cannot be controlled individually; instead, there are five zones, each of which can be set to a different color, with the color automatically affecting every key of the zone. The five zones consist of the main area of the keyboard, the left side macro/layer keys, the function/top macro keys, the numpad/arrow keys, and the fifth zone includes just the sides of the keyboard and the company logo.

From the third tab, called "Settings", users can adjust the polling rate and the keyboard layout. Changing the layout is a handy option for those using multiple layouts, allowing the change of layouts via profiles. Reducing the poll rate of the keyboard however does not seem like an option with any practical use. 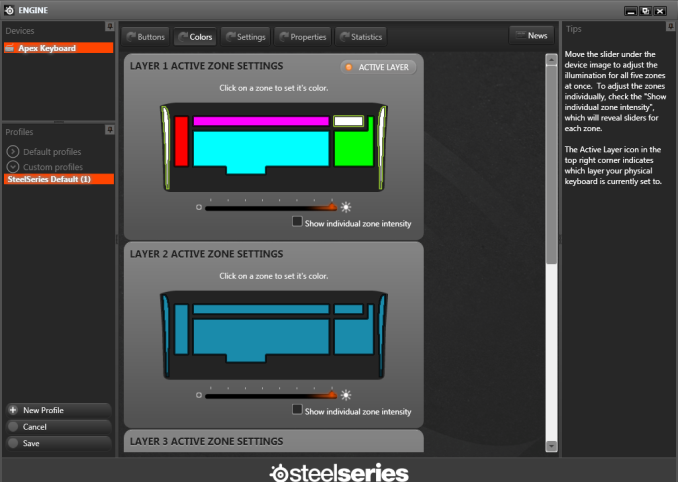 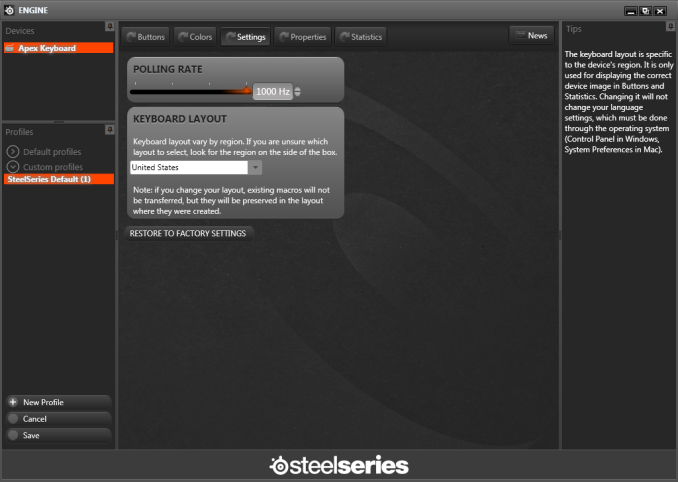 Profiles can be set to activate automatically once an application has been launched, or the user can switch between them manually. This option lies within the fourth tab, called "Properties". The lighting of every layer of every profile can be individually programmed as well, allowing the user to choose colors and create visual feedback indicating which profile/layer is currently active. Despite the ridiculous number of macro keys, the keyboard is fully programmable, allowing the user to alter the function of any single key on it.

Finally, there is a tab called "Statistics", which has a keypress counter. The counter has to be started manually and it actually has little practical use, but it is a fun option for those that want to check which keys are being pressed most frequently. 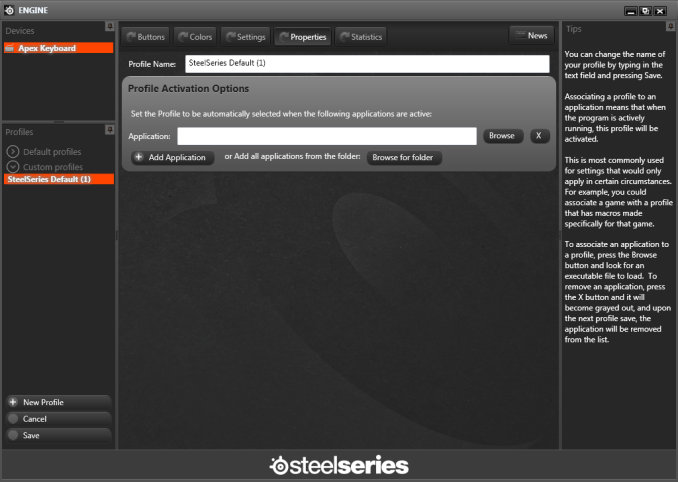 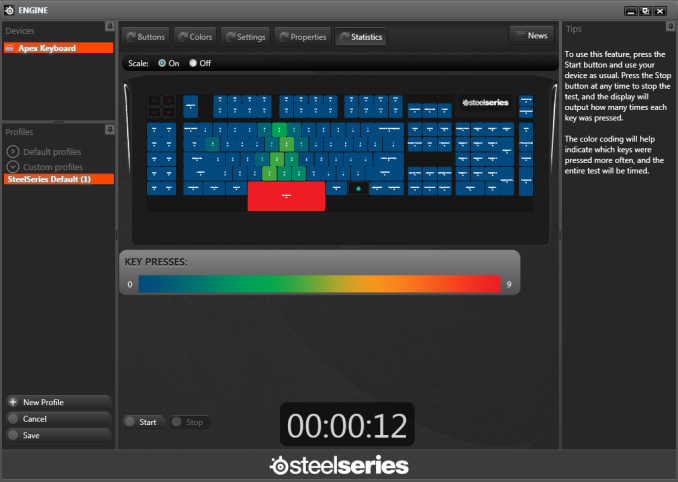