As mentioned on the previous page, the Obsidian 450D is a bridge between the smaller 350D and the larger 750D. It shares the same exact aesthetic design as the rest of the series, a post-minimalistic approach with clean lines, sharp angles, and basic geometric shapes. In fact, if not for the perforated front intake panel, the Obsidian 450D could be easily mistaken for a 350D or a 750D instead. The chassis of the case is made out of 1mm thick SECC steel and the front panel is made out of 2mm plastic. The front panel also forms the two front feet of the Obsidian 450D, while the rear plastic feet are each attached to the metallic chassis. 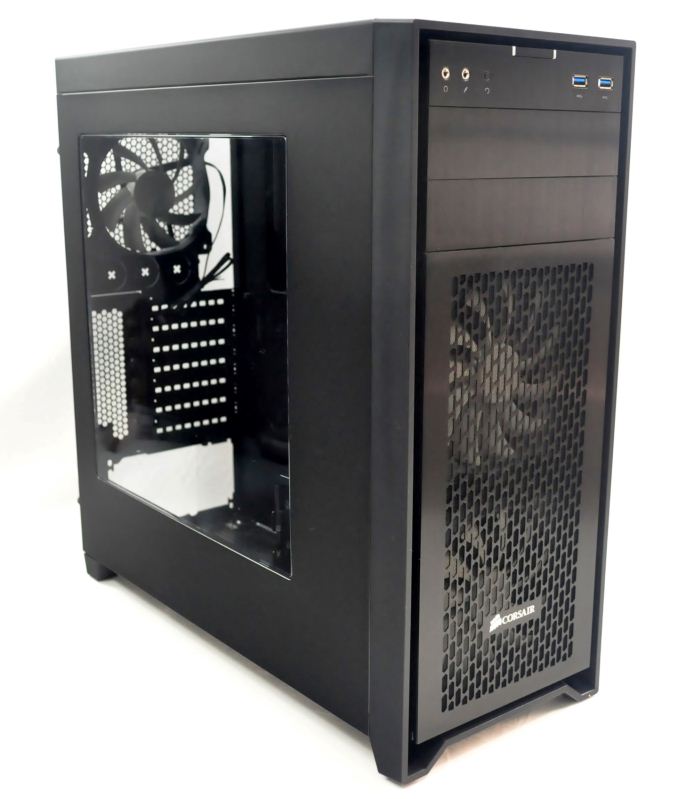 Two USB 3.0 ports and two 3.5" audio jacks (headphones, microphone) can be found near the top of the faceplate, right above the two 5.25" bays of the case. The power on button has a rectangular shape and is placed at the middle top part of the faceplate, between the power on and HDD activity LED lights. The reset button is much smaller and round, aligning in shape and size with the audio jacks.

The rest of the fascia is a removable, washable air intake filter. It can be removed very easily, by simply applying a little pressure at the top two corners simultaneously. Actually, it is so easy and simple to remove that it would probably be a bad idea to leave the Obsidian 450D in the vicinity of unattended children, especially as the removal of the filter reveals two unguarded 140mm intake fans. 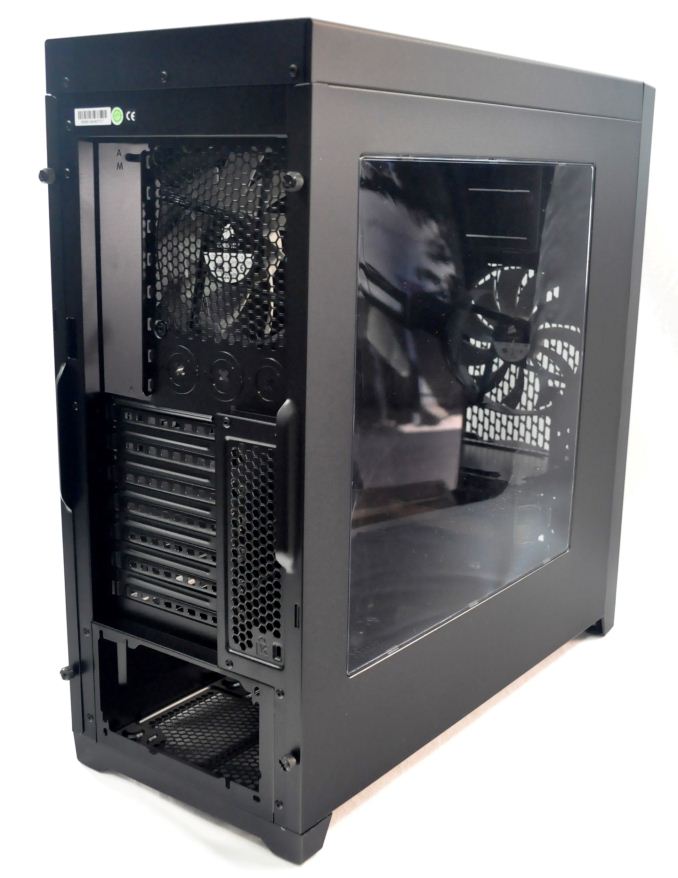 The Obsidian 450D has plenty of ventilation and also plenty of filters installed. Aside from the front filter, there are large filters covering the bottom and the top panels of the case. The bottom panel is almost entirely perforated and a single magnetic filter covers it from one side to the other. It can be removed by simply pulling it off and reattached just as easily; with a little practice and if you have thin fingers, it is possible to remove/reattach the filter without having to roll the case on its side, as the feet of the Obsidian 450D are rather tall. Another similar magnetic filter covers the top panel as well, which actually is little more than a flexible magnetic frame with a dense mesh glued on it, but it matches the theme of the case perfectly and can be removed-cleaned-reattached within seconds.

Although the right side panel of the Obsidian 450D is entirely plain and uninteresting, the left side panel is one of its most prominent features. An acrylic window covers most of the left side panel, exposing much of the interior, including part of the PSU compartment. Due to the window, the left side panel cannot assist with the cooling of the case. Corsair, obviously in an effort to maximize ventilation and offset what little loss the solid side panels could impose, perforated what they could at the rear side of the case, including the expansion slot covers. It is interesting to note that there are three round holes for liquid cooling hoses and or cables; however there are no rubber grommets, only solid metal covers that can be permanently punched out. We realize that the percentage of users that will actually use an external liquid cooling kit with the Obsidian 450D is low but the installation of three rubber grommets shouldn't be much of an issue for a $120 case.