Inside the device beats the heart of Huawei’s latest silicon design efforts: a HiSilicon Kirin 990 SoC. We’ve covered the SoC in some detail already – we have an eight core design built on TSMC’s 7nm that uses Arm Cortex A76 cores and an Arm Mali G76MP16 GPU. Compared to the previous Kirin 980, these cores have had slight increases, but nothing to write home about. The biggest change is in the NPU for AI processing, where Huawei has changed from its licensed Cambricon design to its own in-house Da Vinci architecture, allowing for full AI network support. Huawei has added in a ‘tiny’ Da Vinci NPU to run super-low-power networks such as voice recognition, and a high-powered ‘large’ Da Vinci NPU for performance related AI such as image detection and enhancement. The CPU, GPU, and NPU, also get an additional layer of cache to help with its speed up.

Huawei does have a faster Kirin 990 version on the way, the Kirin 990 5G: this chip is built using 7nm+ EUV, doubles the size of the NPU, but most importantly includes a 5G sub-6 GHz modem on board. This chip will be used in the Mate 30 5G and Mate 30 Pro 5G versions, which are coming out in China this year and select worldwide markets over time. We’re hoping to get hold of the 5G version to see for any quality differences between the 7nm and 7nm+ processes.

The display is a 6.53-inch 2400x1176 Flex OLED display, which comes in at that odd aspect ratio of 18.4:9. This is because of that wrap-around ‘horizon’ display, that comes over the edges. As mentioned on the previous page, some applications ignore these extra sides and act as if the display is a more standard 19:9 to 20:9 display. Huawei states that the display supports the DCI-P3 color space, though does not disclose how much of the gamut it covers, nor the brightness levels of the screen or the accuracy therein.

For the cameras, as mentioned on the previous page, Huawei is positioning the Mate 30 Pro as a premium professional photography assistant device to go alongside more expensive hardware. The three main sensors include a main 40MP f/1.6 OIS RYYB (27mm) sensor, a wide-angle 40MP f/1.8 RGB (18mm) sensor with support up to 7680 fps at 720p, and a final telephoto 8MP f/2.4 OIS with 3x optical zoom. Also included on the rear is a 3D depth camera. 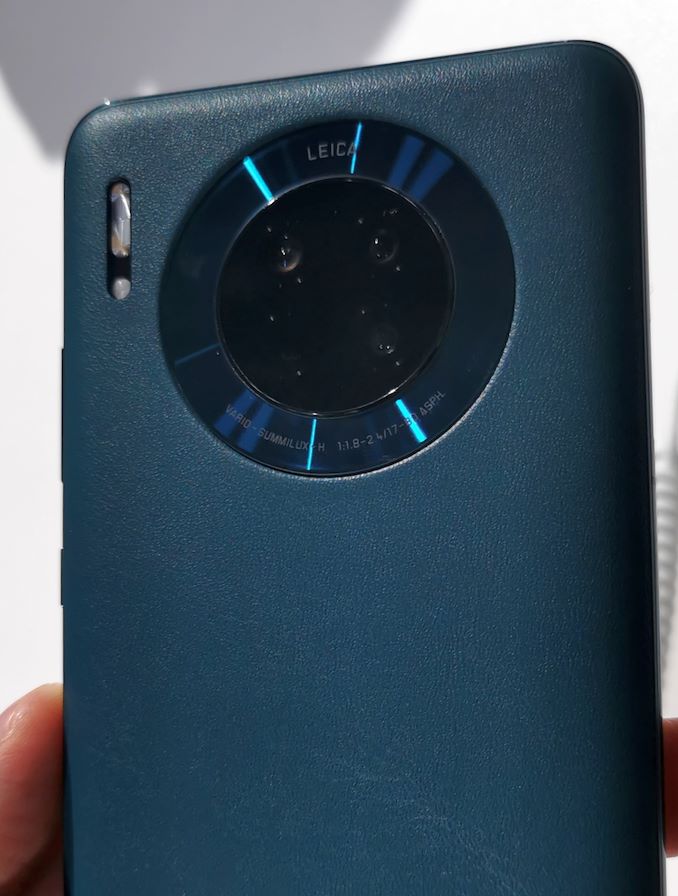 The front camera is a 32MP f/2.0 selfie camera, paired with a proximity sensor, two 3D depth cameras, and a gesture sensor. The two gestures supported include taking a screenshot by making a fist, or scrolling up and down by waving.

The fingerprint sensor is embedded in the display, with Huawei stating that they’re using the latest generation technology. Based on previous Huawei devices, we assume this is a Goodix in-screen fingerprint sensor, which was confirmed via Goodix’s twitter feed. However, when quizzed as to which generation sensor (we know Goodix has at least four), neither Huawei nor Goodix responded to our inquiry.

The battery for the Mate 30 Pro comes in at 4500 mAh, although the company didn’t go into too many details about how long this should last. Huawei is offering the Mate 30 Pro in one main configuration: 8 GB of LPDDR4X-3733 for DRAM, and 256 GB for storage. The device is dual nano-SIM, supporting dual connections, and one of the slots supports Huawei’s proprietary nanoSD card. For the 5G model, both SIM slots can be 5G enabled, although only one at a time. Wi-Fi support is listed as Wi-Fi 5.