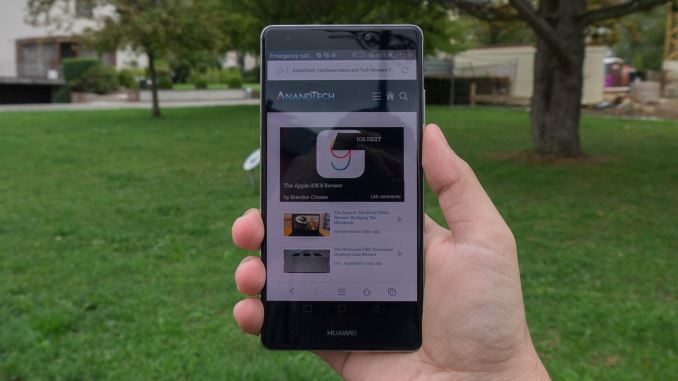 Huawei has been a company which over the past few years has visibly increased its presence in western markets. The Chinese vendor has in particular executed a big push into European markets over the last year as devices have become increasingly available in the usual electronics shops. Following the high-key introduction of the Mate 7 last year, Huawei seems to have settled on a Samsung-like release cadence where we see the smaller P-series introduced in spring and the Mate phablet series in autumn. 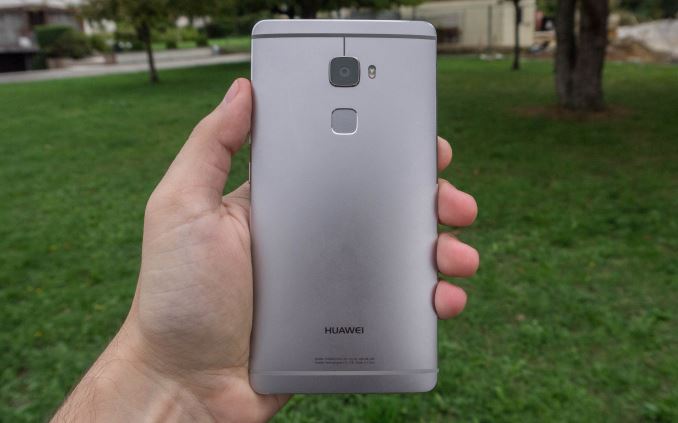 This year Huawei launched the Mate S - not a direct sucessor to the Mate 7, but still clearly a device that continues the design language of the Mate lineup. First up, let's go over the specifications and see what the new hardware provides in terms of upgrades.

At the heart of the Mate S we find the HiSilicon Kirin 935. This is the same SoC that was found on the basic model Huawei P8 - the Kirin 930, but with the difference that it's clocked 200MHz higher on the faster A53 cluster. As a reminder, we're talking about a two-cluster A53 big.LITTLE design, with instead of using "big" CPU core architectures such as the Cortex A57, we see the use of very high clocked A53 cores coming in at 2.2GHz. The slower A53 cluster comes in at 1.5GHz. The GPU is an ARM Mali T624MP4 clocked in at 680MHz.

The choice of re-using the same SoC as found on the P8 in such a high-end marketed device already leaves us with some doubts about its performance, as we had identified some very worrying performance and efficiency issues with in our Huawei P8 review that seems to stem from the choice of the SoC. Unfortunately it seems HiSilicon and TSMC weren't able to deliver the 16nm Kirin 950 successor in time for this product cycle and the company was only able to integrate the new SoC in the newly launched Mate 8.

The Mate S is the first Huawei device coming with an AMOLED screen. In the past I found that the JDI IPS-Neo screens found in the Mate 7 and P8 to had some rather large shortfalls when it came to viewing angles and backlight bleeding, so seeing Huawei switch over to a Samsung SDI manufatured AMOLED screen is an extremely welcoming change and presents a significant upgrade in screen quality.

The new screen comes in at 5.5" with a resolution of 1080p. Since this is an AMOLED screen, we see use of a diamond PenTile sub-pixel arrangement, but this doesn't seem to pose any problem for the majority of the time. 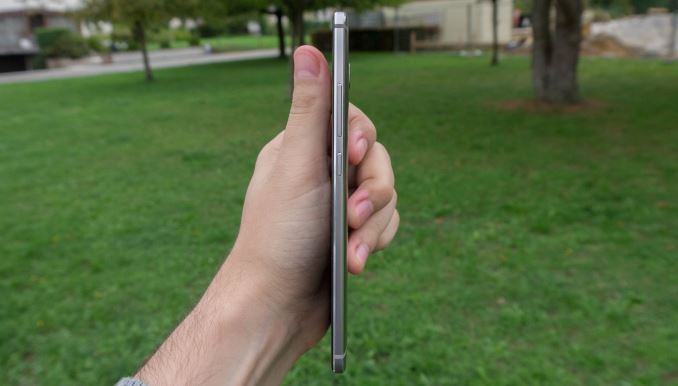 On the camera side, the Mate S outright adopts the camera system of the P8. This means we again see use of Sony's new RGBW IMX278 sensor in an F/2.0 module with optical image stabilization. The image processing is again handled by a dedicated external ISP provided by Altek. On the front camera, we also find the same IMX179 8MP camera module as on the P8, but this time around there's an added soft-flash / front torch that one can use for better lightning in selfie-shots. 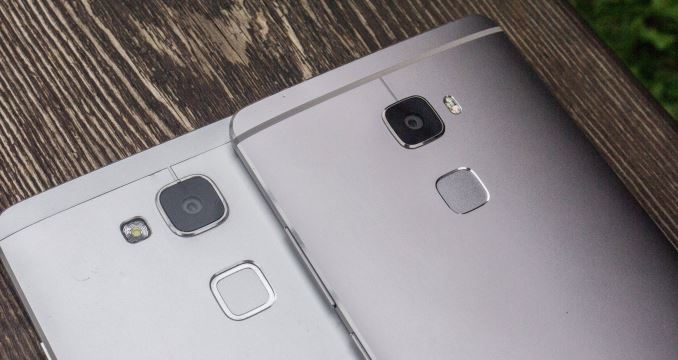 Design-wise, Huawei made some huge strides compared to the Mate 7. While the main characteristics such as the back camera lens and fingerprint sensor underneath it make both devices unmistakably related to each other, Huawei also added a lot of new improvements.

The Mate S ditches the plastic top and bottom antenna covers of the Mate 7 in favour of a full metal-unibody with plastic injected antenna lines. The new model features a new anodized finish that is much grippier than the one on the Mate 7 and feels much more premium.

The speaker has moved from the back to the bottom and now features the same speaker / microphone configuration as on the P8. As a reminder, only the right grill actually has a speaker behind it as the left one is used only for aesthetics and the main microphone. 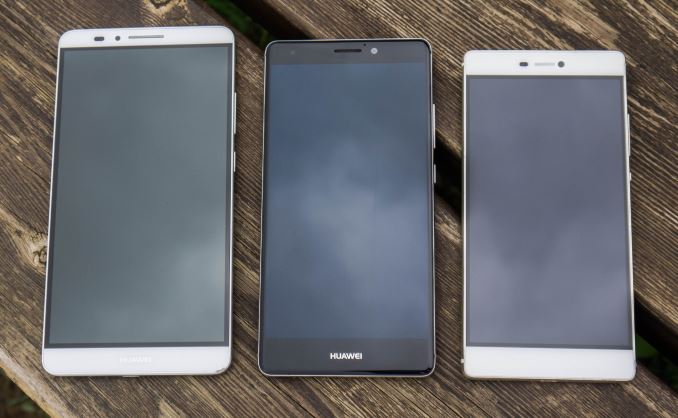 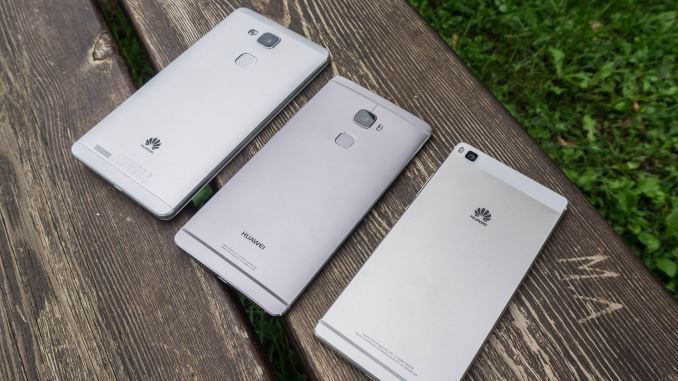 At 149.8 x 75.3 x 7.2 mm the Mate S is smaller than the Mate 7 in every dimension. The device is by far the thinnest I've come to use as both the rounded back as well as the 2.5D Gorilla Glass 4 front make for a very comfortable and ergonomic grip.

At the top of the front face we find, from left to right, the notification LED, the front LED torch, earpiece, camera, as well as light sensors. I only had the device after a few days after which the earpiece grill got dirty with dust, and due to how fine the grain and the recessed nature of the grill it's extremely hard to clean it so I wish Huawei would have gone with a more classical metallic grill.

The bottom is dominated by a quite large bezel with the Huawei logo, actually a regression over the P8 or Mate 7. The Titanium Grey model with full black front is definitely the best looking variant here as it allows for a seamless transition to the on-screen navigation buttons and perfect black background from the new AMOLED screen. 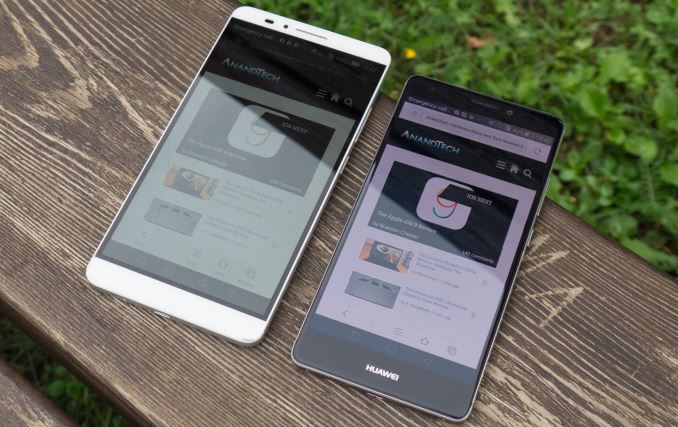 Overall I was very impressed with the build quality of the Mate S. This is by far Huawei's most premium device to date and I consider it to be even among one of the best built and solid smartphones I've used. There is little to critique about the Mate S's looks, and I would welcome Huawei to continue their current design language in future devices.