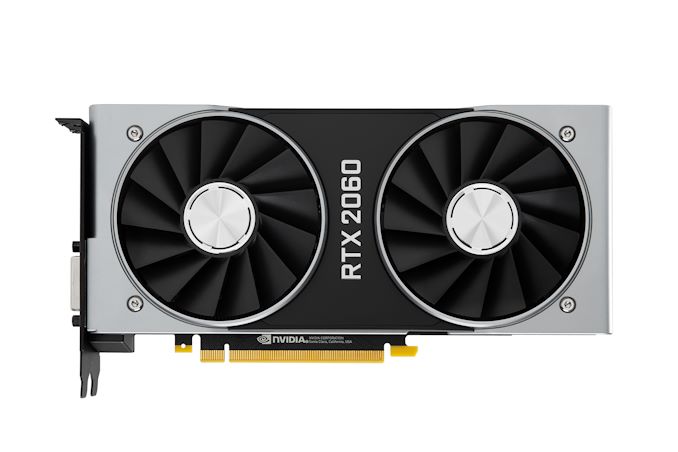 With AMD set to launch their new 1080p-focused Radeon RX 5600 XT next Tuesday, NVIDIA isn’t wasting any time in shifting their own position to prepare for AMD’s latest video card. Just in time for next week’s launch, the company and its partners have begun cutting the prices of their GeForce RTX 2060 cards. This includes NVIDIA’s own Founders Edition card as well, with the company cutting the price of that benchmark card to $299.

The timing, of course, is anything but coincidental. AMD’s Radeon RX 5600 XT announcement back at CES already revealed a significant portion of AMD’s hand, particularly that the card would launch at $279, and that the company is expecting the card to outperform NVIDIA’s GeForce GTX 1660 Ti, their own $279 card. Assuming AMD’s performance claims hold true, then NVIDIA would need to act; either the GTX 1660 Ti or RTX 2060 would need to come down in price for NVIDIA to maintain a competitive edge, and the latter is the direction NVIDIA has decided to take.

Even at $299, the RTX 2060 is not going to be a precise counter to the $279 RX 5600 XT. But the junior TU106 card packs more performance than the GTX 1660 Ti, as well as the complete Turing architecture feature set, making it the strongest hand NVIDIA can play. As always, we’ll see where things land on Tuesday for both AMD and NVIDIA, but it should make for an interesting fight.

On the whole, price adjustments for NVIDIA are quite rare. While prices of NVIDIA cards do tend to fall over time, the company seldom adjusts official pricing in any capacity. Even this week’s cuts aren’t wholly official; NVIDIA hasn’t announced a price cut so much as sent out a reminder that RTX 2060 cards can be found for $299. But regardless, where NVIDIA leads on pricing their board partners will follow, and EVGA, Gigabyte, and others have already begun releasing new cards and shifting the pricing of other cards to reach the new $299 level.