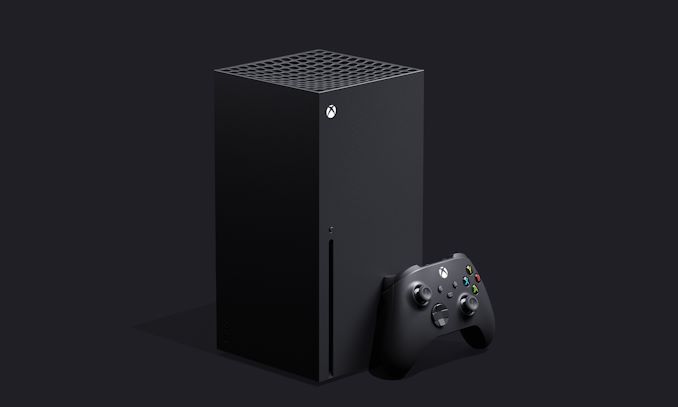 Microsoft this evening has finally given their long-awaited next generation gaming console a name, announcing the Xbox Series X. The device, formerly known as Project Scarlett, is said to be four times more powerful than the current Xbox One X, and along with its new Xbox Wireless Controller will be available in the Holiday 2020 timeframe.

Microsoft has been drip-feeding information about their forthcoming console for the better part of a year now, so today’s announcement of the name and revealing the final design is the latest element in that campaign. The black, monolith-shaped box is certainly unlike any previous Xbox console design, and while touching it probably won’t make you smarter, Microsoft has definitely evolved the design of their hardware. The same goes for the new Xbox Wireless Controller that ships with the console, which incorporates an unusual D-Pad derived from the Xbox Elite Series 2 Wireless Controller. The controller will be compatible with Windows 10 as well.

While Microsoft is still not offering a detailed breakdown of hardware specifications at this time, the company has reiterated their E3 announcement – that the box is powered by an AMD APU combining their Zen 2 processor cores and next generation RDNA architecture – while revealing the first performance estimate for the console: four times the processing power of the Xbox One X. It’s not clear here whether Microsoft is talking about CPU performance, GPU performance, or both – but given that even AMD’s fastest discrete GPUs today don’t exceed 10 TFLOPS, it is likely a reference to the CPU side of matters and AMD’s much faster Zen 2 CPU cores (and going by comments made to GameSpot, this seems to be exactly the case).

As well, the company is reiterating the technical features for the console: hardware raytracing, variable rate shading, Xbox One backwards compatibility, and a “next-generation” SSD. All of which will be used to offer games at 4K@60fps or better, with Microsoft indicating that 120fps will also be an option for developers (no doubt driven by the high refresh rates allowed by HDMI 2.1). In their press release Microsoft is also announcing a new feature called “Dynamic Latency Input” (DLI), which although no specific details about the technology are being made available, is intended to minimize console latency in order to make it “the most responsive console ever”. I would expect to hear more about this in 2020 as the console gets closer to launch.

Finally, along with announcing the console itself, Microsoft has also released a separate video announcing a new Hellblade game, Senua’s Saga: Hellblade II. The trailer for the game is designed to show off the power of the console and is based off of in-engine footage; though it’s not clear at this time if it was captured in real-time or rendered offline.

Expect to hear a lot more about the Xbox Series X over the next year, as Microsoft ramps up to launch it for Holiday 2020.