A good CPU cooler can usually be found at the top spots of an enthusiast’s shopping list, as stock coolers rarely are sufficient for the wants and needs of advanced users, especially when overclocking is involved. Choosing the right aftermarket product can be a little complicated, mostly depending on what the product’s focus is and the available budget. For example, some products have been designed to be as quiet as possible while others strictly aim for maximum thermal performance and neglect acoustic comfort completely. Even if two coolers cost about the same, their behavior can be radically different, and it falls to the user to make a judicious choice according to his/her needs.

Whether the focus of the user is quieter operation or higher thermal performance, there is another factor that can make the purchase of a good cooler complicated: size. Sometimes you cannot just buy the best cooler for the job for the simple reason that it will not fit into the system. This is particularly true for compact and/or narrow cases, especially those meant for ITX systems and horizontal placement. With the majority of typical CPU coolers being tower-type constructs, it is difficult to find one that fits inside compact case designs.

To combat this, many manufacturers designed and produced horizontal coolers, i.e. coolers with the fin array placed horizontally instead of vertically. Horizontal coolers are much shorter than typical tower coolers and tend to cool the motherboard’s parts better as well, yet rumor has it that they do not perform as well as tower coolers. The truth is that size/mass is a major factor here as well, meaning that the horizontal designs are meant to be compact and usually just lack the mass of comparable tower cooler designs. 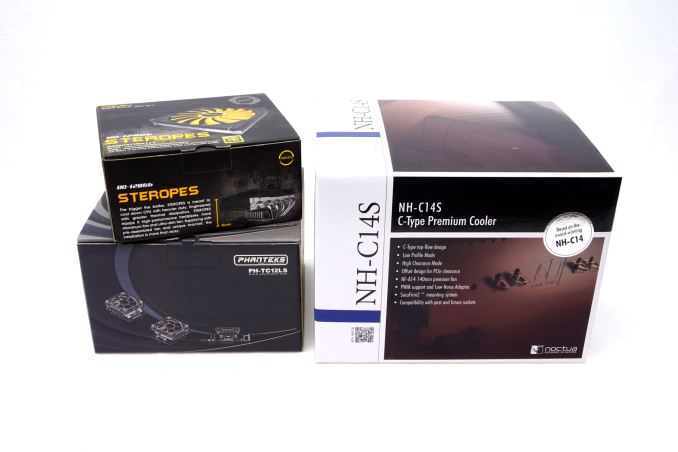 In today's review we will explore three such lower-profile coolers; the Reeven Steropes RC-1206b, the Phanteks PH-TC12LS and the Noctua NH-C14S. These horizontal coolers are all meant for desktop/HTPC designs but they also are significantly different in terms of size, with the Steropes starting at 60 mm tall, moving up to 74 mm with the PH-TC12LS and jumping up to 115/142 mm with the NH-C14S. In the following pages we will explore their design, quality and performance.