The NVIDIA GeForce GTX 1060 is here to contend for mainstream space. Alongside the NVIDIA-only Founders Edition card, we will see a large number of cards released from other vendors (I count 18 in this write up) which gives consumers enough choice to fill a very wide range of needs.

The NVIDIA GeForce GTX 1060 Founders Edition cards will be available only from NVIDIA.com for $299. Meaning that retail outlets will be limited to just the third party cards. These cards, as we will see below, are priced from $249 all the way up to $329 with designs from single fan mini-ITX all the way up to dual fan cards just shy of a full foot in length. So let’s see what NVIDIA’s segment of the mainstream market will look like for the foreseeable future. 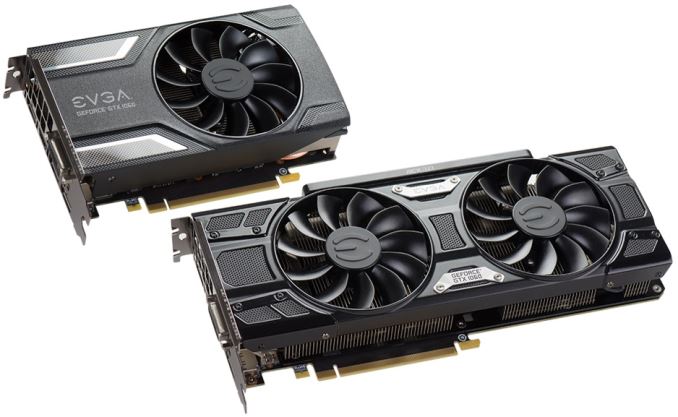 First on the list, which I’m covering in no particular order, is EVGA. They have announced four cards, two which use their ACX 2.0 single fan cooler in an m-ITX form factor and another two that use the relatively new ACX 3.0 dual fan cooler that we’ve seen on cards all the way up to the GeForce GTX 1080. EVGA re-iterates that fans in their coolers use double ball bearings which will result in longer fan life. They also state that their fans use three watts less than competitor’s fans at the same acoustic level, claiming more overclocking headroom as a benefit. Though I’ve seen a larger rise in power consumption from temperature differences alone, so while less power use is good I’m skeptical of meaningful changes to overclocking limits. Speaking of power delivery. The two smaller cards, the GTX 1060 Gaming and GTX 1060 SC Gaming, will each have a single six pin power connector. Meanwhile, the GTX 1060 SSC Gaming and GTX 1060 FTW Gaming will have single eight pin connectors for their power deliver.

Clock speeds for the EVGA’s GeForce GTX FTW Gaming and GeForce GTX SSC Gaming have not yet been announced, as these cards will be launching at a later date. Though It’s safe to assume that they will be faster than the two smaller cards. EVGA’s 1060 Gaming will run at the same stock speed as the founder’s edition card. The 1060 SC Gaming, on the other hand, will see some performance improvements from a 7% overclock. For the two higher tier cards, between the larger cooler and more robust 6+1 power delivery (up from 3+1) there is potential for healthy gains over a stock configuration. For video output EVGA’s offerings all have two HDMI 2.0b ports, two DisplayPort 1.4 ports, and one DVI-D port. Prices for these cards will land at $249 for the GTX 1060 Gaming and $259 for the GTX 1060 SC. We are still waiting for prices on the EVGA’s GeForce GTX FTW Gaming and GeForce GTX SSC Gaming. 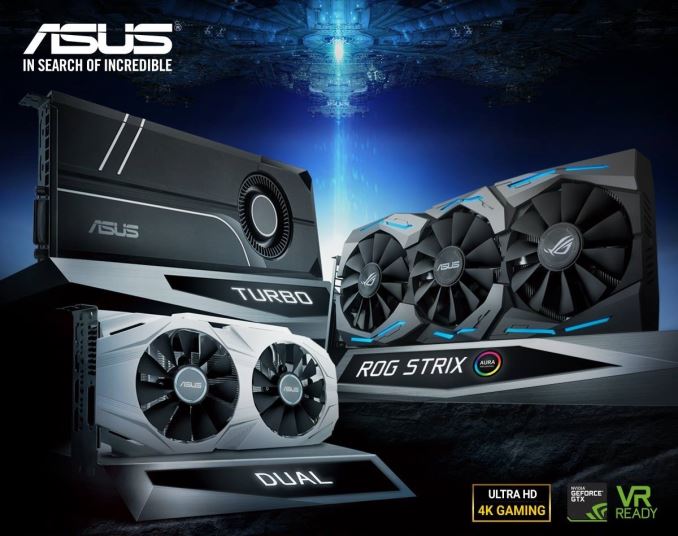 Moving on, ASUS's three cards are the same ones we already visited a few weeks ago. This time though we have numbers to go with the picture we were shown before.

Base clocks have not been announced for all of ASUS's cards, but the boost clock numbers we are shown can give us some idea of the potential these cards will hold. There will be both an overclock ROG Strix card for $329.99 and one with stock clock speeds priced at $309.99. Moving down to the dual fan model we see another OC version and a card running at stock clock speeds which are currently un-priced. Lastly we have the ASUS Turbo GTX 1060 which will be running with a blower style cooler at stock speeds, and be priced at $249. 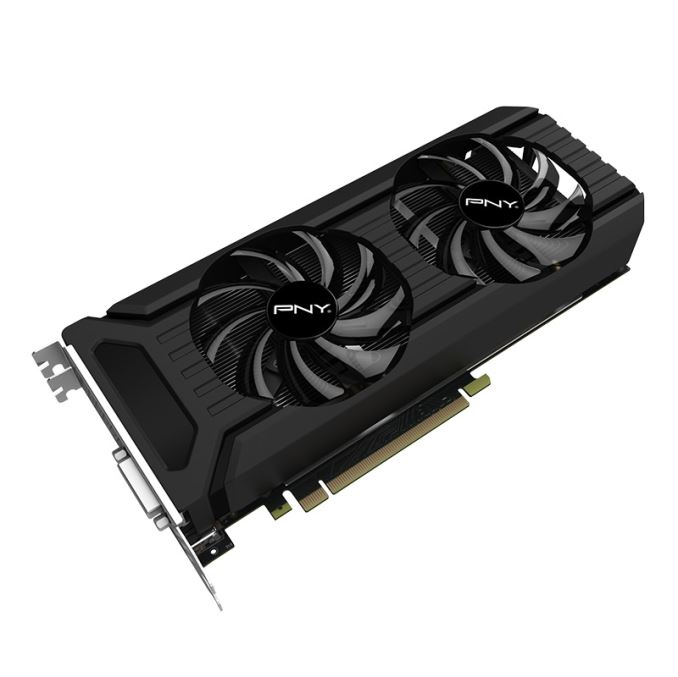 Up next is PNY. Information from PNY on their GeForce GTX 1060 is limited. Based on their pictures we can see what looks like a plastic shroud on a dual fan cooler. The specifications on the webpage for this card have stock numbers all around. Simularly, it appears they're using the stock NVIDIA display connector layout. The PNY GeForce GTX 1060 will have a list price of $259. 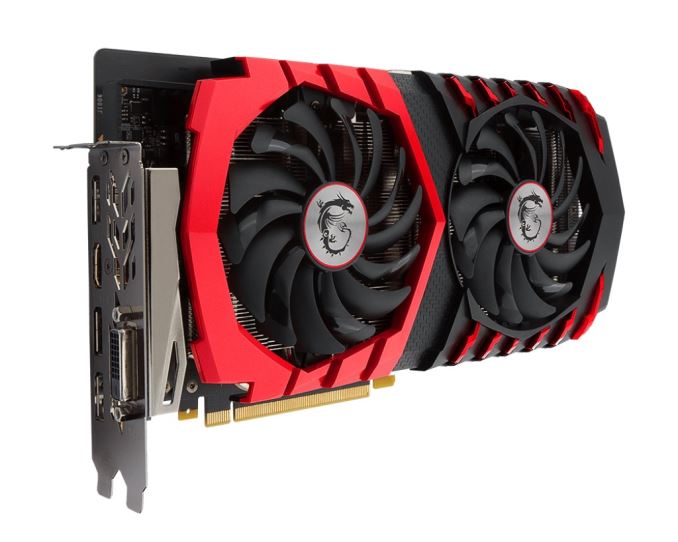 Meanwhile MSI is providing four versions of the GeForce GTX 1060. Three of the cards, the GEFORCE GTX 1060 6GT OC, GEFORCE GTX 1060 ARMOR 6G OC, and GEFORCE GTX 1060 GAMING 6G all have relatively moderate overclocks and sport dual fan open air coolers. Aside from their base model only having one each of DP 1.4, HDMI 2.0b and DVI-D and the others upping the DP 1.4 count to three, the differences are largely cosmetic and cooling. Though the GTX 1060 Gaming supports a silent mode with stock clock speeds and two overclock modes, the fastest of which sits just under the clock speeds of their other two offerings. 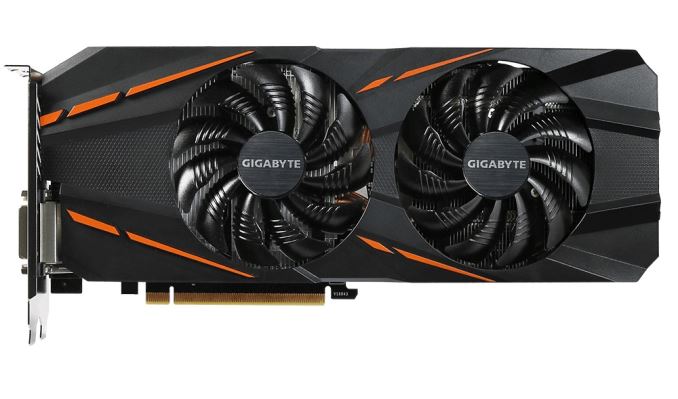 Up next, GIGABYTE is releasing two dual fan models. Both cards possess back plates and RGB lighting. In fact, over on GIGABYTE’s site is a working utility allowing one to play around with the cards RGB lighting from within the browser. Kind of a neat diversion while writing out a news report. Moving on these cards both have a single eight pin for power. With three DP 1.4, one HDMI 2.0b, and one Dual-Link DVI-D. They also both have backplates on their backsides.

GIGABYTES GTX 1060 D5 is running at stock speeds out of the box but has an OC mode that can be enabled through their “XTREME engine utility” which bumps the clock speeds up slightly. The GTX 1060 G1 Gaming card has a healthier boost in both gaming mode and OC mode, giving up to an 8% clock speed boost over the stock speeds. The GIGABYTE GeForce GTX 1060 G1 Gaming will be priced at $289, and it is currently $249.99 for the GIGABYTE GTX 1060 D5. 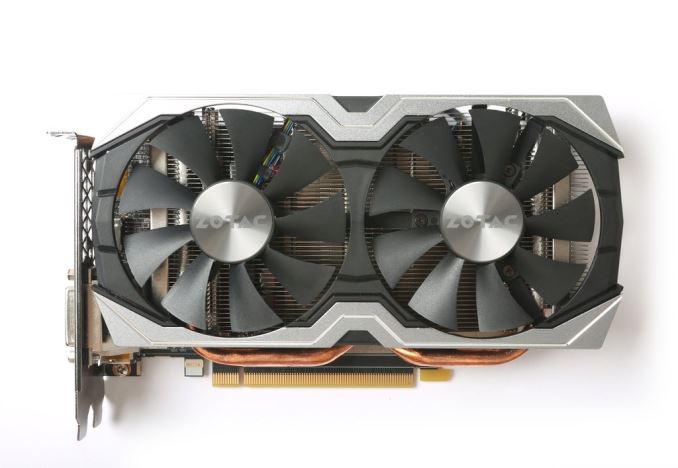 Last but certainly not least, ZOTAC is releasing both a single fan GTX 1060 Mini and a dual fan GTX 1060 AMP! Edition this time around. Neither card has a back plate and both go the three DisplayPort and one HDMI port route for video output. They also each use a single PCI-e six pin connector for power. While the mini-ITX card is running stock we do see a small increase in clock speeds for the dual fan model. The ZOTAC GTX 1060 Mini will be listed for $249 while the ZOTAC GTX 1060 AMP! Edition will be listed for $279.

Wow, this took a while to write up. While I’m sure it’s obvious at this point, there will be quite a lot of options for those looking in the $249 to $329 range. We can see cards ranging from m-ITX ready to nearly foot-longs which wouldn’t surprise if they were quiet with a hefty overclock. For further information, you can see our sources below for each of these cards. Keep an eye out later this week for our pending review of the NVIDIA GeForce GTX 1060 Founders Edition.