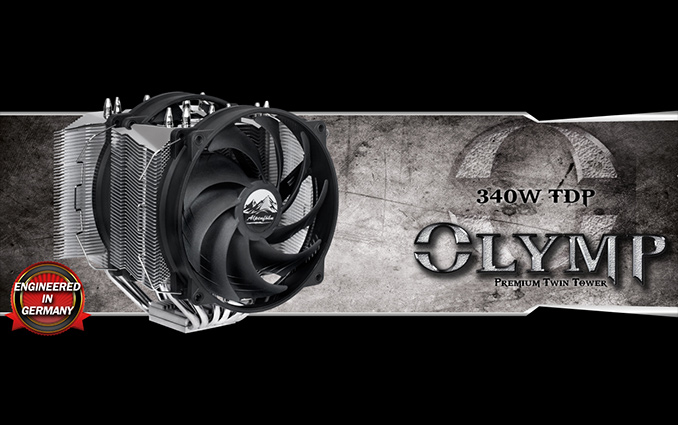 As the market for PC CPU coolers has matured over the last half-decade or so and closed loop liquid coolers have encroached in the space, we haven't seen very many announcements of high-end CPU air coolers. However when we do see new coolers announced, they tend to aim for the stars, and now cooler manufacturer Alpenföhn is doing just that. This week the company is announcing their new Olymp cooler, a rather large tower CPU cooler rated to dissipate up to 340W of heat.

The Alpenföhn Olymp is an oversized asymmetric twin-tower cooler made of aluminum with a nickel-plated copper base as well as six U-shaped 6-mm nickel-plated heat-pipes. The heatsink is 165x151x150mm in size and weighs 1.2 kilograms (without fans); it requires a special mounting mechanism with custom retention plates and will not fit into many small form-factor PC cases (especially with fans installed). The sides of the fins of the heatsink are slightly bent in order to make the most of their surface area and to optimize airflow. 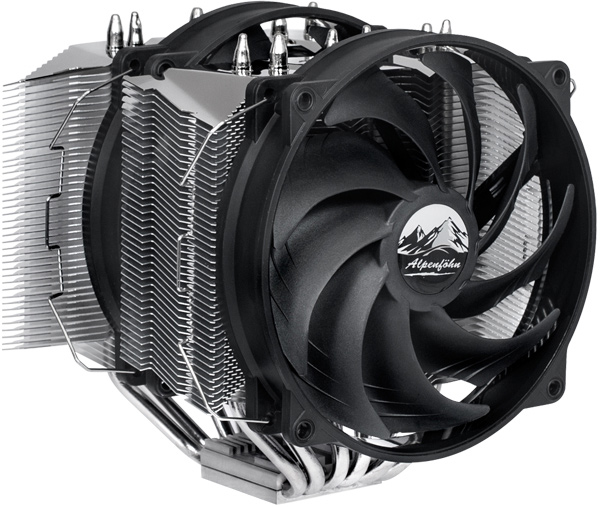 Alpenföhn does not disclose exact cooling fin surface area of the Olymp, but it is pretty clear that it is huge. While heatsinks of such weight and dimensions can cool-down even higher-end CPUs passively (for example, Thermalright positions its HR22 and Macho Zero as passive cooling solutions), the Alpenföhn Olymp can be equipped with 140-mm fans to maximize its potential. Since the cooler is gargantuan, to ensure maximum compatibility with memory modules Alpenföhn proposes installing one fan between the towers and another on the backside of the cooler. Such configuration is common for oversized coolers and it's a rather straightforward solution for dual-channel memory platforms (i.e., LGA115x, FM2/AM3, etc.). However users of quad-channel memory platforms (i.e., LGA2011, where modules are installed on both sides of the CPU socket) will have to adjust height of front and/or back fans so not restrict the installation of memory modules in slots that need to be used. 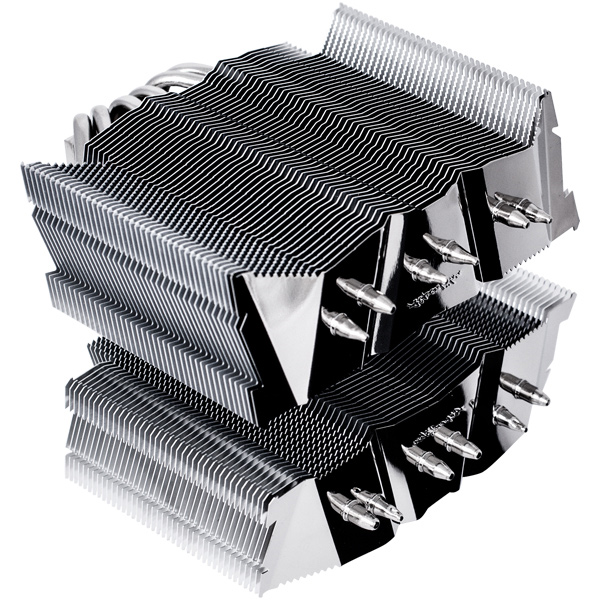 The Alpenfoehn Olymp is shipped with two WingBoost 140-mm fans with PWM control that have 300 – 1400 RPM speed and can push up to 123.38 m3 of air per hour. The airflow pressure of Olymp’s fans is slightly lower than that of the competing Noctua NH-D15 (140.2 m3/h), but with a heatsink that large, it shouldn't matter much for the vast majority of real-world use cases. The fans are rated to produce from 8 to 26.8 dbA of noise — just slightly louder than the maximum amount noise declared for the NH-D15. Alpenföhn rates its fans for 280 thousand hours MTTF (mean time till failure), or about 32 years of 24/7 operation.

The manufacturer believes that its Olymp cooler can effectively dissipate up to 340 W of heat, an extreme amount that greatly exceeds any reasonable TDP of a commercial chip. The Alpenfoehn Olymp will compete against other super-coolers, including Thermalright SilverArrow Extreme (officially rated for 320 W TDP), as well as advanced liquid cooling solutions.

The Alpenföhn Olymp is compatible with virtually all modern CPU platforms, including Intel’s LGA115x, LGA2011 and LGA775 as well as AMD’s AM2/AM3 and FM1. Keeping in mind its huge dimensions and weight, it makes a lot of sense to check thoroughly whether the cooler is compatible with a particular setup before purchase. The cooler is available for €79.9 in various stores across Europe.